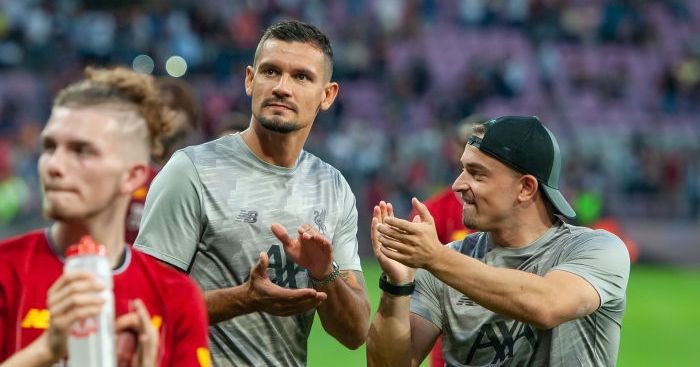 SIGNING THE BLUES
It seems that Frank Lampard preempted Chelsea absolutely sh*tting themselves at Old Trafford – not that he did anything to prevent it. A couple of hours before their season-opening defeat to Manchester United, The Sun carried an exclusive about their future transfer plans.

It is claimed that the Blues have been ‘tracking’ Ben Chilwell as a ‘long-term solution’ to their apparent left-back problem. Emerson was far from their biggest problem on Sunday but the England international would be an undeniable upgrade.

Is it worth it for £70m? Perhaps not. But Marcos Alonso is ‘considering his future’ and Chilwell’s pace is thought to have convinced Lampard that he is the future.

Chelsea are, of course, still serving a transfer ban. They will be barred from signing any players for another window, save for a successful appeal. So, with their entire season in tatters and Lampard already pretty much gone, they are eyeing some January reinforcements.

LOV STORY
Over on Merseyside, ‘there have been progress’ (love you, Google Translate) with regards to Dejan Lovren’s future. The Croatian was omitted from Liverpool’s squad completely against Norwich and is, at best, their fourth-choice centre-half.

As a result, he ‘considers his English cycle closed’. Corriere dello Sport say that while he ‘earns so much at Liverpool,’ Lovren ‘would be willing to lower his salary’ to secure a move to Roma. He will soon try and ‘convince’ the European champions to sanction his departure, hoping to capitalise on their ‘good relationship’.

Roma would prefer him over Daniele Rugani of Juventus due to his ‘experience’. But considering Paul Joyce of The Times say Liverpool wanted at least £25m to sell him this summer, they might soon change their minds.

WANTED MAN
Speaking of outcasted centre-halves at elite Premier League clubs, Eliaquim Mangala still exists. And Valencia inexplicably still want him. He spent the 2016/17 season on loan in Spain and could return for a second spell before the month is out.

This comes from Goal.com, who say the French international ‘has cut a ghostly figure around the club’ since Pep Guardiola was appointed. Is he strolling around the Etihad with a sheet on his head, scaring the b*llocks off Kyle Walker?

Mangala has become ‘a strong candidate’ for Valencia’s problem position of fourth-choice centre-half, which sounds about right. Los Che don’t want to pay any money and so talks ‘are at an advanced stage’ with regards to City’s forgotten man plugging the gap.

AND THE REST
Barcelona say Brazil winger Philippe Coutinho will not leave the club this summer… Talks between Barcelona and Paris St-Germain over the transfer of Brazil forward Neymar have stalled with the French club asking for three players in addition to a fee for the 27-year-old… Representatives for Arsenal midfielder Mesut Ozil, 30, will fly to the US to hold talks with DC United over a potential move for the former Germany international… Juventus manager Maurizio Sarri says 25-year-old Argentine forward Paulo Dybala, who was linked with Manchester United and Tottenham in the summer, may have to leave the Serie A champions or risk being left out of their Champions League squad… Napoli are ready to give up on trying to sign Real Madrid’s Colombia playmaker James Rodriguez, 28, and try to sign PSV Eindhoven and Mexico winger Hirving Lozano, 24, instead… Barcelona will allow Rafinha – who was linked with Liverpool and Arsenal – to leave the club this summer with Valencia the favourites to sign the 26-year-old Brazil midfielder.