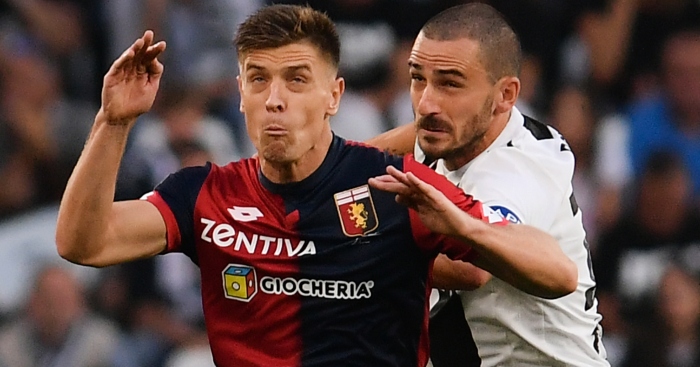 SARRI STRIKER SHOPPING IN SERIE A
Chelsea seem to be honing in on Serie A as they search for a striker who scores actual goals. Alvaro Morata appears to have been written off and Olivier Giroud is out of contract at the end of the season so the Blues are keen to bring in a goalscorer in January, especially if they are still keeping pace with Man City and Liverpool.

Over the weekend, it was reported that Chelsea are focusing on Inter’s Mauro Icardi or Patrick Cutrone of AC Milan. A couple of problems: Icardi would cost a sodding fortune, while youngster Cutrone has showed no indication yet that he is ready to be chucked into Maurzio Sarri’s front line.

So, according to the Daily Mail, Chelsea are looking at Genoa’s Krzysztof Piatek as a compromise between the two Milan-based forwards. Piatek only moved to Italy in the summer but the 23-year-old has made a ridiculous start to his Serie A career. The Poland striker has bagged nine goals in eight games, scoring in every one prior to the weekend’s draw with Juventus. He also netted all four in a 4-0 Coppa Italia win over Lecce.

Having spent only £3.5million on Piatek in the summer, Genoa could see a ten-fold return on their investment in January, with Sarri’s former club Napoli also sniffing.

While checking on Icardi and Cutrone during the Milan derby at the weekend, Chelsea were also keeping a close eye on Rossoneri centre-back Alessio Romagnoli. That’s the word according to Calciomercato, at least…

CITY LINE UP MIDFIELD OPTIONS
Pep Guardiola wanted a midfielder in the summer but he didn’t get one. Manchester City, though, are determined to rectify that situation in January to at least give Guardiola the option of resting Fernandinho.

According to Goal, City remain focused on signing Frenkie de Jong from Ajax but the chances of a mid-season deal for the 21-year-old appear remote. So they are lining up a couple of alternatives.

One of those is Ruben Neves, though Wolves are unlikely to be any more receptive than Ajax to losing their prize asset midway through the season. So City are looking to Lyon, and Jean Michel Aulas may be in uncharacteristically accommodating mood.

Tanguy Ndombele has been identified by City as a candidate and Aulas has admitted that he may not be able to keep the France international. The Lyon president has said: “When players decide to play for Madrid, Barcelona or Manchester, I can’t guarantee that we’ll be able to keep Ndombele or Houssem Aouar next summer.”

AND THE REST
Real Madrid’s possible hiring of Antonio Conte could end their chances of signing Eden Hazard… Divock Origi could be set for a move to Besiktas or Fenerbahce… Fulham are to open contract talks with Ryan Sessegnon…Milan Skriniar has yet to agree a new contract with Inter… Marcelo wants to join Juventus… Leicester are among a host of Premier League clubs interested in Hamburg defender David Bates.