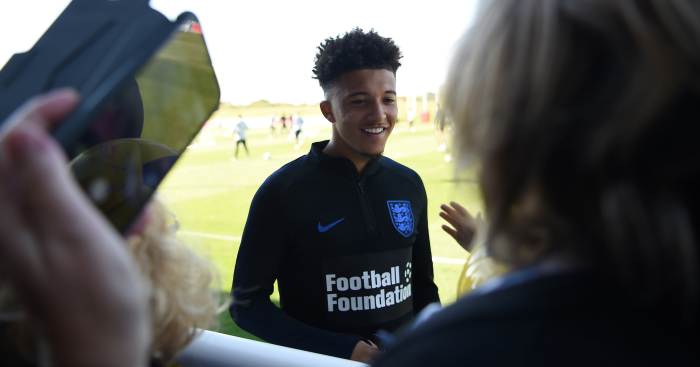 YES, I’M HURTING, YES, I’M JADON
It started on Monday with The Sun’s claim that Arsenal, Chelsea, Liverpool, Manchester United and Tottenham were preparing ‘a series of monster bids’ for Jadon Sancho. They said that the Borussia Dortmund winger would cost ‘at least £100million’ if any potential suitor wanted to make their interest concrete.

The Manchester Evening News now further the story – and it is good news for Manchester City. They ‘have an edge on their rivals’ if they enter the race to re-sign a player they sold for £8m in 2017. Not only are they ‘believed to have a 15 per cent sell-on clause’, but they ‘they had a buy-back clause’ inserted into the deal which saw him leave.

‘That means if City match any fee offered for Sancho, they will get first refusal,’ says Stuart Brennan. Is that how buy-back clauses work? And does this 15 per cent sell-on clause not mean that they’d technically be paying less anyway if they ‘match any fee offered’?

There is also the rather simple point – one mentioned in the first paragraph but glossed over thereafter – that City might not actually want to sign Sancho. He is not mentioned as a potential target, just that City would have an advantage if they did try to sign him.

NOU WAY
Elsewhere in the world of £100m-rated European superstars, Alberto Moreno is somehow a wanted man. And he is somehow wanted by Barcelona. Oh, football.

Mundo Deportivo have taken a pretty in-depth look at which players the Catalan lads might target in the future. And it seems as though left-backs are very much on the agenda, as Barca would quite like to find ‘Jordi Alba’s second’. Ferland Mendy of Lyon is mentioned, as well as Valencia’s lovely José Luis Gayà. Also on the radar are Juan Bernat (PSG) and Yuri Berchiche (Athletic Bilbao).

But none of them can hold a candle to Moreno, who ‘is not entering the plans’ of Jurgen Klopp at Liverpool. Barcelona strongly believe they can get the Spaniard at ‘a good price’, as this is the Reds’ final opportunity ‘to scrape some money for the Sevillian’. His contract at Anfield expires at the end of the season, so a January sale is possible.

AND THE REST
Manchester United remain relaxed about David de Gea’s contract situation, despite having been in talks with the 27-year-old Spain goalkeeper over a new deal since August… Chelsea playmaker Eden Hazard, 27, is waiting to see if Real Madrid say they will try to sign him next summer before making a decision on whether to stay at Stamford Bridge or not… Real Madrid were interested in bringing in Liverpool manager Jurgen Klopp as a replacement for Zinedine Zidane during the summer… Chelsea are monitoring former manager Antonio Conte’s next move, with a compensation bill yet to be agreed for the Italian, who is being linked to Manchester United, Real Madrid and Bayern Munich… Monaco are lining up former Arsenal and France striker Thierry Henry, 41, to replace Leonardo Jardim as manager… Tottenham will target Lyon and France midfielder Tanguy Ndombele, 21, in the January transfer window… Manchester United manager Jose Mourinho will personally scout Fiorentinaand Serbia defender Nikola Milenkovic, 20, during the international break… Mourinho wants Manchester United to sign Inter Milan centre-back Milan Skriniar and AC Milan defender Alessio Romagnoli, who are both 23, in the January transfer window.