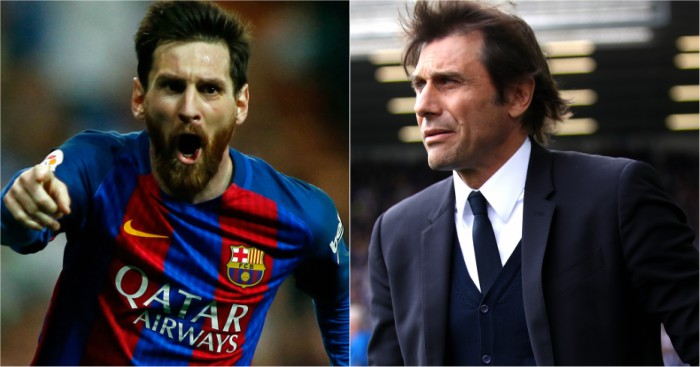 MAKING A CASE FOR CONTE TO INTER
Inter Milan’s new Chinese owners appear to fancy their chances of luring Antonio Conte away from Chelsea and back to his homeland this summer.

The Mirror reports Inter are preparing a £10million-a-year contract for former Juventus and Italy coach Conte, plus a massive wad to spend in the transfer market.

Given Conte is just two victories from winning the Premier League title and another win over Arsenal in the FA Cup final from securing the Double in his first season in charge, it may seem ludicrous that the 47-year-old would consider quitting Chelsea after just one season in charge.

But might this be as good as it gets for Conte at Stamford Bridge? The Blues squad requires some remodelling in the summer, with Diego Costa said to be off and doubts surrounding Eden Hazard. Chelsea have led from the front for much of the season in the Premier League but their squad hasn’t been tested by the rigours of European football, which it most certainly will be next term.

Add to that that the Chelsea role is generally a two-season job, and you wouldn’t blame Conte for at least considering Inter’s offer to leave the Premier League a king and return to Italy, where his family is still based, to rebuild one of the giants of Serie A.

MESSI REJECTS BARCA EXTENSION OFFER
Man City’s ears no doubt pricked up at reports in AS that Lionel Messi has rejected Barcelona’s first offer to extend his contract beyond next summer.

Barca are said to have opened up with a proposal worth £480,000-£575,000 per week AFTER TAX but Messi and his father have told the club to come back with a better offer.

City have been the only club credited with a serious interest in tempting Messi away from the Nou Camp, with some reports plucking a figure of £800,000-a-week out of the sky.

Perhaps disappointingly for City, AS suggests there remains the appetite on both sides to extend Messi’s Barca deal, with the report saying ‘the signals being sent to club president Josep Maria Bartomeu by the player and Messi Sr remain reassuring in nature’.

PREM GIANTS EYE GRAY
A number of reports suggest Demarai Gray is considering his future after being left frustrated at a lack of consistent playing time at Leicester this season, with The Sun naming three ‘Premier League big-hitters’ who are sniffing around the 20-year-old.

Spurs, Liverpool and Everton are all keeping an eye on Gray, who has managed only nine starts this season and hasn’t made it off the bench in five of the Foxes last 10 games.

The Guardian suggests Gray has a £22million buy-out clause in his contract, though Leicester have refuted that.

AND THE REST
John Terry has been offered the chance to join Diego Costa in China at Tianjin Quanjian…Tottenham, Liverpool and Everton monitor Leicester winger Demarai Gray as he eyes move away for more football…Monaco striker Kylian Mbappe, 18, has told his agents to secure him a move to Real Madrid…Rob Elliott admits Newcastle’s promotion-winning players fear for their futures…Riyad Mahrez is ready to spark a summer transfer scramble by quitting outgoing champions Leicester, and is keen to join a Champions League club…Sam Allardyce has confirmed he wants a reunion with Sunderland striker Jermain Defoe if his Crystal Palace side stay up…Stoke may try to hijack their weekend hosts Bournemouth’s move for Chelsea legend John Terry.

Newcastle have joined the race to sign Celtic left-back Kieran Tierney…Chelsea are also in for Tierney…Mark Hughes has indicated he could reignite his interest in John Terry with a deal for Bruno Martins Indi appearing to hit the buffers…Arsenal flop Lucas Perez primed for summer exit with Arsene Wenger set to snub him for Manchester United tie…Pedro Caixinha is preparing for a wholesale clear-out of the Rangers squad…Contrary to reports in Spain, journalist Guillem Balague claims that Barcelona have no interest in signing 24-year-old Liverpool playmaker Philippe Coutinho…Newcastle have been linked with 21-year-old Malaga striker Sandro Ramirez, who has a £5.1m release clause in his contract…
Bristol City defender Aden Flint, 27, is being chased by West Ham and West Brom.