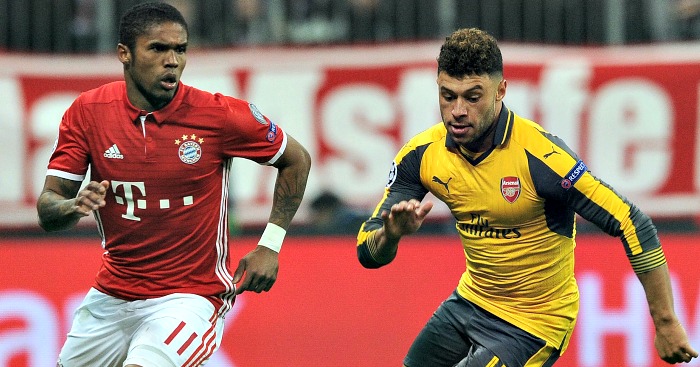 SPURS EYE COSTA AND KEANE
Tottenham are reportedly planning for life in the Champions League by putting together a bid of £25-30million for Douglas Costa.

That is according to The Mirror, with the paper’s back page claiming Spurs are keen to take advantage of the Brazilian winger’s supposed unhappiness at Bayern Munich to bring him to the Premier League.

What is it that is making poor Douglas so unhappy? Eighteen starts in all competitions means he apparently feels under-appreciated, and a stand-off in his contract negotiations isn’t helping either. We say ‘stand-off’, more specifically, Costa wants a pay rise and Bayern have told him to do one.

Mauricio Pochettino, though, wants to wrap his loving arms around the 26-year-old, all the while getting shot of Moussa Sissoko.

Another Tottenham whisper, this one from the Daily Telegraph, says Pochettino fancies stirring sh*t up by joining the race for Michael Keane.

According to Matt Law, a Spurs move for Keane would boost Manchester United’s hopes of getting their hands on Eric Dier.

Keane or no Keane, we still can’t see that one ever happening…

NEW SUITOR FOR ZLATAN
Los Angeles Galaxy apparently face competition from within their own city for Zlatan Ibrahimovic.

The Daily Mail claims new MLS franchise LAFC are ready to offer Ibra £5million a season to become the face of their new team, but the striker could be loaned back to Europe for the first half of the season, which is supposed to be a win-win for all involved.

Would Manchester United see it that way? The prospect of losing Zlatan around the start of next year in time for the 35-year-old to prepare for the MLS kick-off in March seems hardly ideal. And would £5million be enough to tempt Zlatan, given Kaka is MLS’s highest earner on £5.6million?

REAL READY TO PAY £60M FOR DE GEA
Real Madrid sniffing around David De Gea is news to no one, but The Sun claims the Champions League semi-finalists are ready to pay £60million for the keeper.

That is almost double the current record fee for a goalkeeper, though Gianluigi Buffon set that bar 16 years ago when he moved to Juventus from Parma for £32million. Real, perhaps wary of the absolute clusterf*ck they made of it last time, are apparently keen to get a deal for De Gea done quickly so they accept that he won’t come cheap.

The Sun quotes ‘a Madrid source’ as saying: “De Gea is the top priority. We expect him to come this summer.”

If United don’t play ball, then Thibaut Courtois is Real’s alternative, and despite his improved form this season, the Chalsea keeper still gives the impression that he’d walk to Madrid if there was a contract waiting there for him.

AND THE REST
Paris St-Germain’s Ivory Coast right-back Serge Aurier, 24, has told Manchester United boss Jose Mourinho he wants to play for the Old Trafford club…Real Madrid will bid £60m – nearly double the world record fee for a goalkeeper – to sign Manchester United’s Spain goalkeeper David De Gea, 26, this summer…Real Madrid and Spain striker Alvaro Morata, 24, has alerted Chelsea by reportedly growing frustrated at a lack of game time in Spain…Arsenal boss Arsene Wenger reportedly turned down to the chance to sign midfielders N’Golo Kante, 26, who is now with league leaders Chelsea, and Thomas Lemar, 21, now with Monaco, for a combined £12.6m only two years ago…Chelsea fear that a fresh £650,000-a-week offer from China has turned the head of 28-year-old Spain striker Diego Costa.

Liverpool are prepared to play midfielder Emre Can, 23, until the end of his contract, regardless of whether the Germany international commits to a new deal this summer…Captain Troy Deeney says he has been “linked with everyone” but could leave Watford this summer “if they want to get rid of me”, with West Brom eyeing a £20m move for the 28-year-old English striker…Claudio Ranieri says he is ready to return to management, two months after he was sacked by Leicester…Up to 16 players could leave Sunderland this summer, with the Black Cats looking destined for relegation to the Championship…Everton’s Belgium striker Romelu Lukaku has told friends he wants to rejoin Chelsea this summer, with the Toffees having put a £100m price tag on the 23-year-old.

Having been been linked with Chelsea and Manchester United, Lukaku has now revealed he subscribes to their clubs’ TV channels…Manchester United are the favourites to sign Real Madrid’s James Rodriguez this summer, although Arsenal remain an interested party…Manchester United boss Jose Mourinho is looking to offload Juan Mata, with reports he is keen to sign Benfica’s Anderson Talisca as an Old Trafford replacement….Fulham’s English left-back Ryan Sessegnon will sign a professional contract with the Championship club when he turns 17 next month…Southampton want to sign Iceland playmaker Gylfi Sigurdsson, 27, from Swansea and Leeds’ Sweden defender Pontus Jansson, 26…Southampton, Everton, West Ham and Newcastle are interested in signing Sigurdsson, who is valued at £35m.