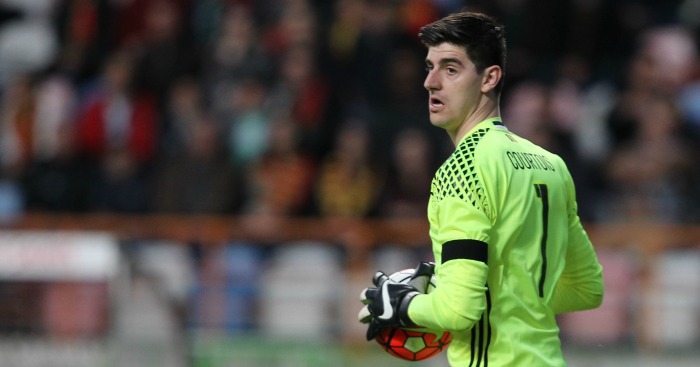 CHELSEA VALUE COURTOIS AT £65M
Yes, you did read that right. The Daily Mail claim that Chelsea want £65m – which would shatter the world-record fee for a goalkeeper – for the Belgian. Apparently ‘the price is likely to prove a stumbling block’. You don’t say. Apparently, there is a willingness from Chelsea ‘to conclude a deal which could work in Real’s favour as they look to secure a cheaper price’. So basically they know they’re not going to get £65m and want to somehow make Real Madrid think they have got a bargain if they let him go for £35m. Standard.

The Mail repeat the now-familiar line that Courtois clashes with goalkeeping coach Christophe Lollichon, something interim boss Guus Hiddink appeared to confirm when he said: “They are different personalities. But they do well, they are very professional, they work hard.”

WATFORD WANT BERAHINO
‘I want doesn’t get’ is what mother used to say and that will probably apply to this claim in the Daily Mail that ‘Watford are lining up a shock cut-price swoop for Saido Berahino as they prepare to cash-in on Odion Ighalo’. They can line up swoops all they like, but it’s difficult to see Berahino leaving the Baggies for a team two places up the Premier League table. The suggestion from the Mail is that they will be able to grab the striker for less than £10m because he is out of contract next summer. But if Berahino is available for less than £10m, we suspect he will have slightly sexier suitors than Watford.

RODGERS SIGNS ON AT SWANS
The Premier League needs him and it seems Swansea have answered the call because the Daily Star are exclusively claiming that ‘BRENDAN RODGERS is set to be named Swansea boss as soon as the season is over’. They claim that a £90,000-a-week deal has already been agreed for the Northern Irishman to take over the Welsh side again and the silence from the club is only out of respect for Francesco Guidolin, who has done an excellent job in stabilising the club after the exit of Garry Monk.

AND THE REST
Manchester United have sent scouts to watch defender Reece Oxford in West Ham United’s under-21 side…Bournemouth are set to offer £6m for Tottenham midfielder Ryan Mason…Greek side Panathinaikos are lining up a summer move for Arsenal’s 32-year-old midfielder Mathieu Flamini…Liverpool midfielder Jordan Rossiter will join Rangers this summer when his contract at Anfield expires…Tottenham have been warned off midfielder Cheikhou Kouyate – after West Ham cheekily asked for Harry Kane in exchange.