Home All The News Gossip: Coutinho asks to leave, Chelsea to nab replacement 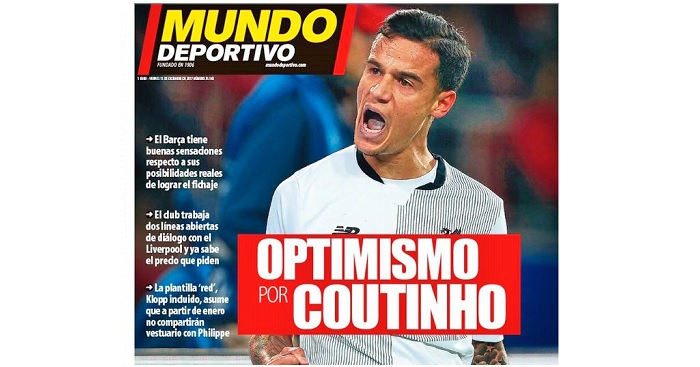 GET YOUR PHIL
Let’s skip the British newspaper mistranslations and sensationalism and head straight to the source of Friday’s main course of transfer bullsh*t, shall we? And by the Mundo Deportivo headline of ‘Optimismo en el Barça por Coutinho’, you can probably see where we’re headed.

The claim is that Barcelona ‘continues to work quietly and unobtrusively’ in the transfer market. Yeah, you never hear a f***ing peep from those silent Catalan buggers.

It is believed that while Liverpool were successful in keeping Coutinho in the summer, he ‘never ceased to be a priority goal for January’. And what’s more, the Reds have ‘changed their attitude’ from their previous stance of ‘no deal’. As a result, Barca ‘have good feelings in order to finalize the signing of Coutinho in January’.

The price would be €145m, or £127.2m, and Coutinho is considered as the ideal replacement for Andres Iniesta. On the player’s part, the Brazilian ‘continues to press hard to go out and fulfill his dream’, and ‘he has again asked for his sale’.

INSERT LEMAR LYRICS HERE
‘Liverpool is already preparing: it wants to advance the arrival of Naby Keita (of RB Leipzig and who has tied for summer) and sign Thomas Lemar (Monaco),’ continues the Mundo Deportivo article. And on that note, just where is Thomas Lemar headed?

According to The Sun, it might well be to Chelsea. Liverpool and Arsenal are still interested in the France international, but the Premier League champions believe they can steal a march on their rivals and sweeten the deal with the offer of a player. Michy Batshuayi might do it.

Batshuayi has scored nine goals in 16 games for Chelsea this season, but his battle for starts at Stamford Bridge continues. He has started just two of 17 league games, and was only a second-half substitute against Huddersfield even despite Alvaro Morata being sidelined.

Antonio Conte ‘might be tempted’ to let Batshuayi go on loan as a result, in a bid to ‘pick up game time – and his confidence’.

With how Liverpool would need to replace Coutinho and how rubbish Alexis Sanchez has been for Arsenal this week, should they really be letting Chelsea win this race?

MESUT AND TIE
But what would a transfer-merry-go-round of Liverpool selling Coutinho to sign Lemar, only for Chelsea to sign Lemar ahead of both the Reds and Arsenal, be without Manchester United? According to pretty much every British newspaper on Friday morning, United want Mesut Ozil, and are willing to sell to buy.

The player United would be looking to offload is Henrikh Mkhitaryan, who has fallen firmly out of favour at Old Trafford. According to John Cross of the Daily Mirror, United are confident of recouping £30m on a player they signed for £23.6m in summer 2016.

Any sale would be to facilitate Ozil’s move to Manchester, a switch he prefers over Barcelona. Silly sod.

AND THE REST
Manchester United have made an enquiry about 29-year-old Chelsea forward Willian… Manchester City want to add a centre-back to their squad in January and will move for either Southampton’s Virgil van Dijk or Real Sociedad’s Inigo Martinez, both 26… City boss Pep Guardiola is also in the market for a left-back in January… Liverpool remain keen on Southampton’s Netherlands international Van Dijk… Everton boss Sam Allardyce will not argue if the club decide to offload Ross Barkley, 24, in January, with the midfielder yet to sign a new contract… Barcelona are keen to sign Manchester United’s versatile defender Daley Blind, 27, on a free transfer when his contract runs out in the summer… Manchester United will rival Juventus for the signing of Monaco midfielder Fabinho, 24… Representatives from Fenerbahce are flying to Liverpool in a bid to secure a loan deal for midfielder Marko Grujic, 21.