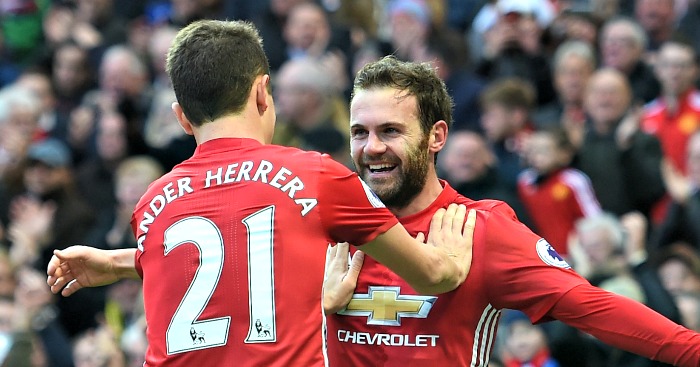 MESSI WANTS BARCA TO SIGN COUTINHO AND HERRERA (OR MATA OR OZIL)
We’re starting in the Star on Sunday, which is not necessarily a reliable thing to do. They use information from Diario Gol – who have an equally accurate record – to bring us news that Lionel Messi is desperate for Barcelona to sign new players.

Diario Gol also say that they know who Messi’s two top transfer targets are: Philippe Coutinho and Ander Herrera. Now, Coutinho is hardly a surprise name given that Barcelona had three bids rejected this summer and the Brazilian submitted a transfer request to Liverpool.

However, the other name(s) are a little more interesting. Ander Herrera would be an odd shout, but he’s hardly first choice at United. Mesut Ozil is another, which makes sense given that he is available for nothing next summer. But Juan Mata at 29? Really?

ARSENAL VS SPURS FOR MAHREZ
It’s to the Sunday Mirror now, and our old Sunday transfer friend Steve Stammers. Stammers believes that Arsenal and Tottenham will go up against each other for Riyad Mahrez of Leicester, and it seems an entirely reasonable shout. Both of them could do with a wide attacking player – particularly if Alexis Sanchez is sold.

Stammers writes that Mahrez is likely to cost £30m, and it’s worth pointing out that he has been nowhere near his best this season. He wanted to leave for Barcelona in the summer, but that deal failed to materialise.

It just feels inevitable that Mahrez will play for Arsenal at some point, doesn’t it?

EVERTON WANT RAFA TO REPLACE KOEMAN
Oh wow. In the Sun on Sunday, Neil Ashton has a big exclusive. And that exclusive is that Everton want Rafael Benitez to replace Ronald Koeman should the club’s form not improve.

Ashton writes that Benitez is ‘high up on the list of potential successors’, which is a little different to saying they want him, but it’s still a lovely line.

Benitez does still have a house on Merseyside, but would he really manage Everton after leading Liverpool to the Champions League? It would be heck of a decision to make.

AND THE REST
Chelsea and Manchester United are interested in a deal for Tottenham full-back Danny Rose… Barcelona are preparing to swoop for Southampton defender Virgil van Dijk… Tottenham’s new stadium may not be ready for the start of next season… Bacary Sagna could be on his way to Italy to join Inter or AC Milan… Brighton are keen on Aleksandar Mitrovic… Pep Guardiola wants Ryan Bertrand to boost Manchester City’s title hopes.