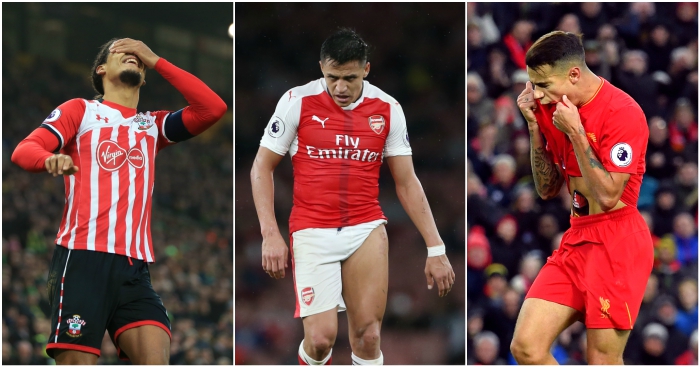 IT’S A SANCHEZ TRANSFER MERRY-GO-ROUND
It is the last Sunday of the transfer window, so it is no surprise to see updates on the biggest sagas of the summer. We’ll start with Alexis Sanchez, and claims in the Sunday Mirror that his move away from Arsenal might still be a thing.

They claim that Andros Townsend could be sold by Crystal Palace to Leicester City, which seems reasonable enough if Palace actively want to get relegated by selling players without buying any. That transfer would then reportedly allow Leicester to let Riyad Mahrez leave, with Arsenal the strongest suitor.

You know what that means, don’t you? Mahrez’s arrival persuades Arsene Wenger to go back on everything he has repeatedly said this summer by selling Sanchez to Manchester City. It really would be very funny indeed.

FIVE PREMIER LEAGUE CLUBS IN FOR SUBOTIC
Having been at Dortmund since 2008 and joining from Mainz in the same summer that Jurgen Klopp made the same journey, nobody has played more games under Liverpool’s current manager than Neven Subotic.

So when the Sunday Mirror say that Subotic is eyeing a move to the Premier League, there’s no surprise one of the clubs mentioned. He was linked with a move to Liverpool in July 2016, January 2017 and now August 2017. For the record, the Mirror also say that Chelsea, Leicester, West Brom and Stoke are also all interested in signing the Serbian.

Not to pour cold water over talk of Liverpool and Chelsea, but Subotic is surely not that level of player anymore. He might only be 28, but after injury problems has only started 48 Bundesliga games since May 2013 and was loaned to Koln last season.

LIVERPOOL AND CHELSEA WANT RENATO SANCHES
Now then. The chances of Renato Sanches actually leaving Bayern Munich for a Premier League club seem a little slim, but those chances certainly increased when Sanches was left out of Bayern’s matchday squad to face Werder Bremen on Saturday.

Sanches cost Bayern £44m and is clearly a talented central midfielder, but has struggled to cope with life in the Bundesliga. Given that Bayern want to make most of their money back on him, any permanent deal is going to be a massive risk. Liverpool and Chelsea are the two clubs mentioned by the Mail on Sunday as being interested in him.

Still, if Sanches does flourish in England then it would soon look like a bargain, given the inflated market. We would also have the ridiculous situation whereby a player could move for £40m-plus twice before turning 21.

COUTINHO TO NEGOTIATE EXIT IN SUMMER 2018
Oh wow, here is a line. The Sunday People make the claim that Philippe Coutinho will get on with trying his best for Liverpool – and overcome his mystery illness – once the club agree to sell him to Barcelona next summer.

In truth, Coutinho’s bargaining position is weakening all the time. Barcelona have spunked a chunk of their Neymar money on Ousmane Dembele, and therefore are unlikely to stretch to £130m to sign another attacking player.

That would leave Coutinho being forced to come back into the Liverpool fold, whatever his personal ambition to move, a repeat of the Luis Suarez situation. The Uruguayan was persuaded not to join Arsenal in order to leave for Barcelona the following summer.

AND THE REST
Arsenal will sell Alex Oxlade-Chamberlain to Chelsea this week… Inter Milan want Stevan Jovetic to join Newcastle rather than Sevilla… Watford and Burnley are battling to bring Inter Milan defender Andrea Ranocchia back to the Premier League… Newcastle will offer Chelsea striker Loic Remy the chance to resurrect his career at St James’ Park… Stoke City are set to sign Tottenham centre-back Kevin Wimmer and will also hand Ryan Shawcross a new contract… Swansea will have to stump up £12m up front if they want to sign PSV Eindhoven right-back Santiago Arias.

Virgil Van Dijk has pleaded with Southampton to let him leave the club this week after a series of rows with officials… Manchester United defender Chris Smalling is a target for Leicester City… Tony Pulis is pushing to sign Liverpool’s Mamadou Sakho… West Brom have launched a £10m bid for Fenerbahce defender Josef de Souza… Everton have put an £8m price tag on striker Oumar Niasse… Sporting will make a move for Sunderland midfielder Jack Rodwell if they are able to sell West Ham target William Carvalho.