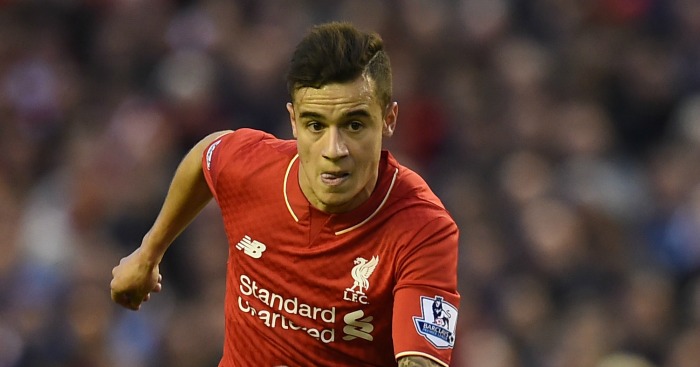 PSG WANT COUTINHO
Now this is interesting. There is a consensus that PSG are interested in Liverpool’s Philippe Coutinho and that the French club have already sounded out the Brazilian’s representatives about being a marquee summer signing for the Ligue Un champions. Reports in France have even suggested that there was a ‘positive’ reaction to the suggestion from Coutinho, who would rather like to play Champions League football. The fee mentioned is £46m, which would represent a massive profit on the £8.5m paid to Inter Milan in January 2013.

The caveat is that Coutinho might be just one of several players being sounded out by PSG, who are said to be interested in Manchester United’s Anthony Martial, Chelsea winger Eden Hazard, Napoli striker Gonzalo Higuain and Everton’s Romelu Lukaku as they look to plug a rather large gap left by Zlatan Ibrahimovic.

BENTEKE TO CHELSEA?
Oh gossip, you really are spoiling us today after the barrel-scraping of Thursday. This is from The Times, who claim that Chelsea are looking towards Christian Benteke as a cheaper alternative to Romelu Lukaku, who could cost £65m from Everton. It’s fair to say that Benteke would not cost close to that amount and is not being coveted by PSG and Juventus like his Belgian teammate.

Benteke has been linked extensively with West Ham, but would presumably walk to Stamford Bridge for the chance to line up as a striker in Antonio Conte’s Chelsea side. Will you join us in the sneaking suspicion that he would be a 20-goal striker if he was given the right kind of service?

AMAVI TO LIVERPOOL?
Now this makes sense. Liverpool desperately need a left-back who knows how to actually defend and Jordan Amavi needs a new club because he is far too good for the Championship. The only sticking point is that he is recovering from a serious knee injury so could represent something of a risk. Anyway, L’Equipe claim that Liverpool could get Amavi for around £10.8m and that they have already been in touch with his agent, who presumably whooped with joy.

AND THE REST
Manchester United have made a British transfer record bid of £60m for French midfielder Pogba, who left Old Trafford for Juve in 2012…Real Madrid determined to sign Man United’s David De Gea before June 15…Manchester City’s signing of 25-year-old Germany midfielder Ilkay Gundogan is the start of a summer spree in which new manager Pep Guardiola could spend £250m…City are ready to pay a £39m release clause to sign French defender Aymeric Laporte from Spanish club Athletic Bilbao…Everton want the Southampton boss Ronald Koeman as their new manager and are prepared to make him one of the highest paid in the Premier League…Besiktas sporting director Gokhan Keskin has confirmed the Turkish club are targeting Arsenal goalkeeper David Ospina.