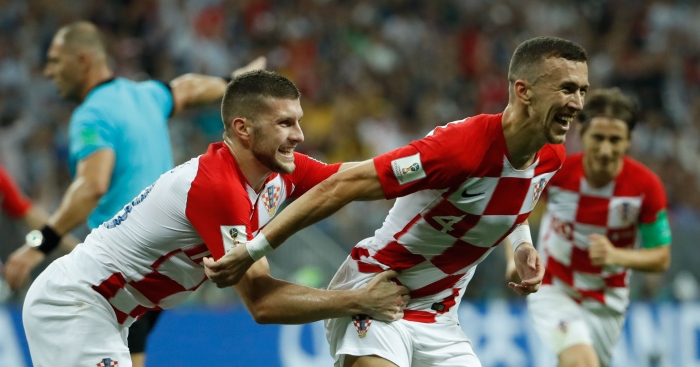 MANCHESTER UNITED ARE ACTUALLY GOING TO GO FOR REBIC
Now we know why Manchester United are giving in to Jose Mourinho’s demands, but there has to come a point where a deal just isn’t worth it. Mourinho reportedly wants United to sign Ante Rebic, and it sounds like the club are actually going to do it.

Rebic joined Eintracht Frankfurt for a fee of €1.8m eight weeks ago. He played ok at the World Cup, but was far less impressive than Ivan Perisic. United agreeing a deal to sign him for a reported £44m would surely be lunacy?

Still, the Daily Mail say that is exactly what is happening. Manchester United have reportedly made contact with Frankfurt over a summer move for Rebic. The Bundesliga side will look to make a £43m profit in eight weeks. Talk about upping the Ante.

LIVERPOOL AGREE VIDA FEE
From one Croatian World Cup player to another. Liverpool’s interest in Domagoj Vida has been rumoured for a while, and Turkish media reckon that Jurgen Klopp is going to get his man. What is it they say about scouting players on World Cup form?

In fairness, we’re not even sure Liverpool need another central defender. Joel Matip’s injury is not thought to be that serious, while Dejan Lovren and Virgil van Dijk are the first-choice starting pair. Joe Gomez and Ragnar Klavan are back-up options, so is Vida really needed too?

Anyway, A Spor say that Liverpool have agreed terms with Vida over a two-year deal, but must no agree a fee with Besiktas. Besiktas are holding out for £22m, and you can see their point given Vida’s performances in Russia.

COURTOIS AGREE TERMS WITH REAL MADRID
You know what, we’re getting to the stage where it’s better to just ignore all reports about Real Madrid’s goalkeeping situation and have another look at the beginning of September.

Yesterday, The Sun’s back-page exclusive was that Real were making a £60m move for Tottenham goalkeeper Hugo Lloris. Which would seem ambitious with two weeks left in the transfer window, giving Spurs no time to source a replacement.

Today, the Daily Mail’s exclusive is that Real have agreed personal terms with Chelsea goalkeeper Thibaut Courtois, and all that is left to do is a agree a fee with Chelsea. That’s easier said than done, but with Courtois’ contract expiring next summer it’s surely easier than persuading Tottenham to sell Lloris.

AND THE REST
Newcastle are closing in on a £9m move for Japan striker Yoshinori Muto… Wolves have agreed to pay £18m for Middlesbrough winger Adama Traore… Chelsea target Aleksandr Golovin has agreed a deal with Monaco… Ivan Perisic has turned down a move to Manchester United and opted to stay at Inter Milan.