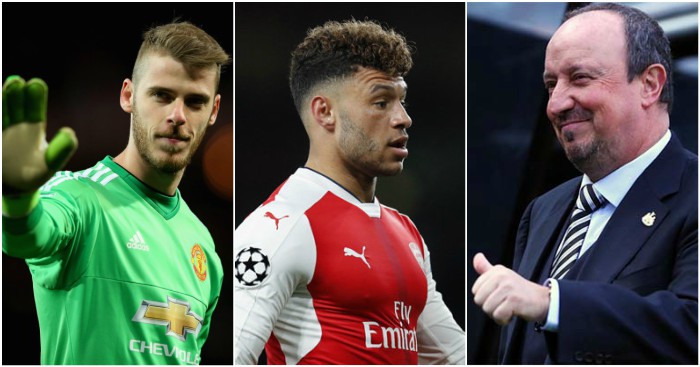 LIVERPOOL WANT ADAN
This isn’t the first time that we have heard Antonio Adan’s name linked to Liverpool. The Real Betis goalkeeper was talked up for a move back in January, and again in February. Now it’s April, and those stories have returned.

Liverpool’s potential move for a goalkeeper has been covered at length. Neil Custis wrote only last week that Joe Hart ‘will join’ Liverpool this summer. That was rubbished by Jurgen Klopp.

Now it’s 29-year-old Adan who is supposedly at the front of the queue to replace Simon Mignolet, despite Klopp insisting that he doesn’t even want a new goalkeeper. The report comes from Estadio Deportivo in Spain, who say that Adan wants to test himself at a better and bigger club, and has been subject to interest from Marseille and Liverpool. His release clause is £6.8m.

File this one under ‘unlikely’.

MOURINHO TELLS DE GEA HE CAN LEAVE
And while you have that file off the shelf, might as well add this claim to it. Marca are reporting that Jose Mourinho has told David de Gea he can join Real Madrid this summer.

Actually, what is more likely is that Mourinho has intimated that no player will be kept at Old Trafford against their will, and that he only wants players prepared to buy into his project. What is also clear is that if Real are to sign De Gea, he will not come cheap.

There is a massive difference between ‘every player has their price’ and ‘tells player he can leave’. Let’s just wait and see, eh.

BENITEZ TO ASK FOR £100M KITTY
An interesting line in most of the papers concerns Rafa Benitez and Newcastle. The claim is that Benitez has ‘demanded’ a huge transfer war chest in order to lead Newcastle in the Premier League.

It’s The Sun and David Coverdale that go biggest on the story. Coverdale writes that Benitez could quit as Newcastle manager if the club don’t give him £100m to spend on his squad, and give him full control over recruitment.

Now it is only right that Newcastle spend money to try and consolidate their position in the Premier League, but it does seem slightly un-Benitez to make these demands of an owner, blackmailing them with threats to leave. It would also seem ridiculous for these claims to have been made the day after promotion was sealed, no?

OXLADE-CHAMBERLAIN TO GET A BUMPER CONTRACT OFFER
In the great scheme of things, £100,000 a week isn’t a stupid amount of money for a player at an elite club, but it does sound like an awful lot of cash when you say it out loud after Alex Oxlade-Chamberlain’s name. Arsene Wenger has regularly reiterated his desire for Ox to stay at Arsenal and sign a new deal, and he has improved recently, but that’s still a big contract offer for a player who has struggled to break into the first team on a regular basis over the last three years.

AND THE REST
Liverpool are ready to smash their transfer record to lure Southampton’s Virgil van Dijk to Anfield… Tottenham are prepared to make defender Toby Alderweireld one of their highest-paid players… Liverpool defender Mamadou Sakho is growing in transfer value after impressing at Crystal Palace on loan… Alex Oxlade-Chamberlain is set to be offered a stunning £100,000-a-week deal to commit his future at Arsenal… Sam Allardyce is set for a transfer battle with former club West Ham for Sunderland’s Lamine Kone.