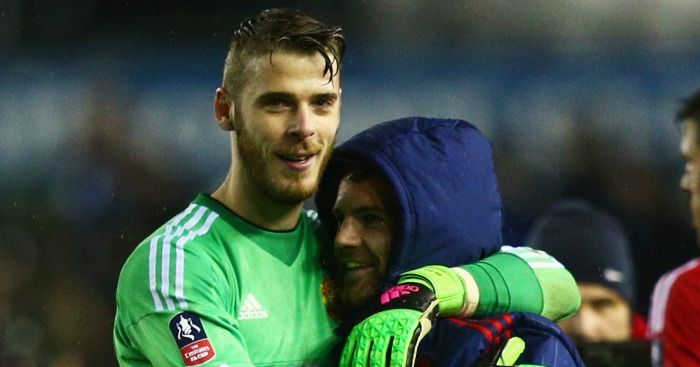 REAL MADRID BACK FOR DE GEA
This simply will not go away. According to Spanish newspaper AS, Real Madrid will again try to sign Manchester United goalkeeper David De Gea in the summer, having failed on transfer deadline day last year. With Real’s transfer ban suspended pending appeal, they claim that De Gea will be Los Meringues’ priority as soon as the transfer window opens again in the summer. They remain convinced that De Gea still wants a move back to Madrid.

COSTA AND MARTINEZ TO SWAP?
We’re sure we have read this before but The Sun’s Antony Kastrinakis says this is an exclusive, and who are we to doubt The Sun’s Antony Kastrinakis? The story is that Atletico Madrid manager Diego Simeone is desperate to have Diego Costa back at the club and is ‘offering hitman Jackson Martinez to Chelsea’. Which is a kind offer but we are not sure Chelsea would want to part with Costa (five goals in his last five PL games) for a £25m striker who has not scored since October. Ah, it even says here: “Chelsea are unlikely to make a deal.’ Right. Well, that was pointless then.

Elsewhere, we hear that Chelsea want Alvaro Morata in the summer for around £40m. We’re struggling to understand the clamour for a player who has scored once in Serie A this season.

REMY TO LEICESTER
This is an odd one because it seems to have come entirely from journalist Ben Jacobs, who works in Dubai for talkSPORT and BeINSport, amongst others. He is a Leicester fan, though, so possibly knows what he is talking about when he says that the Foxes have agreed to pay a club record £11.5m fee for Loic Remy, having been rebuffed in an initial loan bid. We did read earlier this week – via France – that Remy was not exactly excited by the prospect of a relegation battle with Leicester.

AND THE REST
Sunderland striker Steven Fletcher is attracting interest from West Ham…Aston Villa’s attempt to sign Croatian goalkeeper Lovre Kalinic from Hadjuk Split has failed after a work permit application for the 25-year-old was rejected…Everton and Republic of Ireland midfielder Aiden McGeady is mulling over a move to Sevilla in La Liga…Swansea have offered Crystal Palace £7m for striker Dwight Gayle…Watford are prepared to pay Liverpool £3m to sign 19-year-old striker Jerome Sinclair and spend £4m on Fiorentina’s 28-year-old defensive midfielder Mario Suarez.