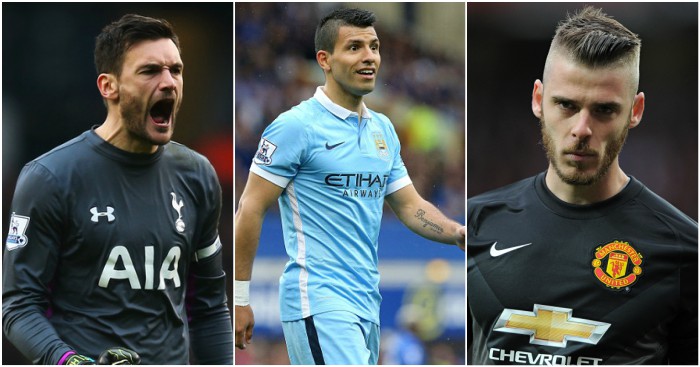 OH GOOD, REAL MADRID AND DAVID DE GEA IS A THING AGAIN
To the Daily Telegraph first, and a report from Matt Law about the goalkeeping situation at Real Madrid. Law writes that Real are after a new goalkeeper this summer, and that they believe Hugo Lloris will be easier to prise away from his London club than Thibaut Courtois will be from his.

Law is keen to point out that there is no suggesting that Lloris or Tottenham are prepared to entertain a move, but in the player’s case that must surely depend on Champions League qualification?

Unfortunately, Law then also mentions that David de Gea is high up on Real Madrid’s list, which makes us yearn for August 2015 and ‘broken fax machines’. It was simpler time, when N’Golo Kante was a relatively unknown midfielder, Donald Trump was just the host of the Apprentice and *Googles 2016 crazes* nobody knew what extreme phone pinching, thighbrows or the shot glass challenge were.

EVERY BUGGER WANTS AGUERO
Weird that when the best striker in the Premier League (no, not Romelu Lukaku) gets left out his side for two consecutive games, every elite club in the world thinks ‘We’ll have a piece of that’. And by weird, I mean entirely predictable. Take a deep breath:

– The Daily Express say that Real Madrid are dead keen on Aguero.

– The Sun say that Pep Guardiola will try to sign Pierre-Emerick Aubameyang if he sells Aguero.

– The Daily Star say that Aguero has been told to stay and fight for his place at Manchester City.

Summary: Lots of agents are saying lots of things and nobody really has a clue.

LIVERPOOL TO BEAT MAN UNITED TO FOREST KID
The big clubs were circling even before Ben Brereton scored his first Nottingham Forest goal against Aston Villa on Saturday, but that last-minute winner live on Sky Sports has only increased the speculation surrounding the 17-year-old. He doesn’t even have a Wikipedia page yet.

In the Daily Mirror, Adrian Kajumba reports that Liverpool are determined to win the race to sign the striker after having a £2.5m bid rejected in the January transfer window. They will look to go in again in the summer, with Manchester United also keen on making a move this summer.

You do have to ask yourself why Brereton would take the move. Of course the money is good and the club incredibly prestigious, but United already have Zlatan Ibrahimovic, Marcus Rashford, Anthony Martial and plenty of talented young players too. Stay for two more years, establish yourself in the first team, go to a club like Southampton where you can hope to be given opportunities to progress rather than being shunted out on loan and then move from there to an elite club if it works out. Basically, speak to Pat Bamford.

AND THE REST
Antonio Conte was at the Juventus Stadium to watch his former club take on Inter Milan – and left just as reported transfer target Paulo Dybala was substituted… Arsenal and West Ham will have to meet a £60m buyout clause to secure Alexandre Lacazette… Former Wolves, Reading and Fulham striker Seol Ki-hyeon has been appointed South Korea’s assistant manager… Aston Villa are going up against Arsenal by keeping tabs on Blackpool winger Bright Osayi-Samuel, according to reports… Southampton are in discussions over a deal for free agent Martin Caceres. The 29-year-old defender had a trial spell with Crystal Palace last week but they opted against making him an offer… Leicester’s players are facing a 40 per cent cut in their wages if they are relegated.