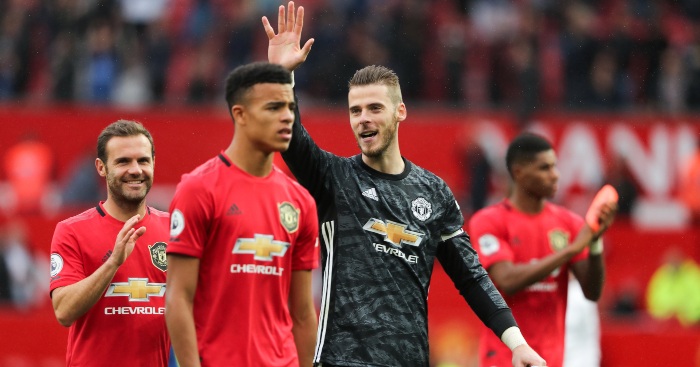 JUVENTUS WAITING TO TAKE DE GEA
Saturday’s whispers suggested Juventus were preparing to hoover up all the Premier League’s free-agent talent next summer, with three Manchester United players and a couple of Spurs stars on their list. The Sunday Express doubles down on one of those links, specifically involving David De Gea.

Juventus are said to be counting down the days until January when they are allowed to talk to De Gea – though let’s not pretend those discussions haven’t already begun – over the prospect of moving to Turin at the end of the season.

United are aware of the prospect of losing De Gea and the Express chuck Jan Oblak’s name in to the mix as a replacement. The Red Devils were said to be close to persuading De Gea to sign a new contract during pre-season but that £350,000-a-week deal remains ominously unsigned.

You could hardly blame De Gea if he is thinking of taking up Juve’s offer. Come next summer, the Spain stopper will have clocked up nine years of service at Old Trafford and Juventus must look an attractive proposition to a keeper who deserves to be playing Champions League football.

BARCA’S WHIP-ROUND FOR NEYMAR
Over in Spain, the fall-out continues following a transfer window during which neither of the big hitters signed their primary targets.

Barca failed to persuade PSG to give up Neymar for the loose change down the back of the Catalans’ couch and some of the deadwood in Ernesto Valverde’s squad. According to Marca, Barca’s desperation reached the point when their players will willing to have a whip-round to hep the club re-sign the Brazilian.

Apparently Barca’s board did not entertain the players’ offer and some squad members were not even aware of the proposal. Just imagine Antoine Griezmann’s reaction if his pay slip arrived with a Neymar tax deducted.

REAL WANT PSG STAR MORE THAN POGBA
Real Madrid were no more successful in their pursuit of Neymar and their attempts to sign Paul Pogba were even less fruitful. But they want you to forget all that and focus on the fact they are going to sign Kylian Mbappe next summer instead.

Sport claims Zinedine Zidane has already convinced the France striker to make the move, though that was hardly a problem with Neymar. Real will have to come up with the cash to land Mbappe, who won’t come any cheaper than whatever PSG and Man Utd were demanding this summer.

Apparently, Zidane wants Mbappe even more than he wanted Pogba and some reports suggested he might have quit when it began to look like the United midfielder wasn’t going to be signed this summer.