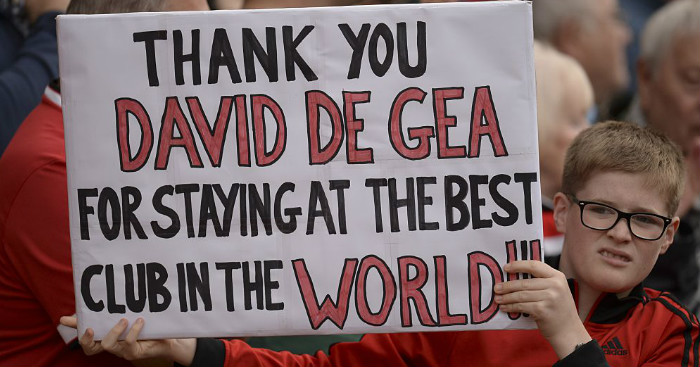 HE’S ACTUALLY JUST AS GOOD AT SIGNING HIS NAME WITH HIS FEET
David De Gea looks set to sweat Manchester United out before committing to a new contract. By which we mean he’s going to make them wait, obviously, not that he’s going to squeeze an entire football club out of his pores like the weirdest X-Men character ever.

The Evening Standard report that despite the extra negotiation time afforded by triggering a 12-month extension option back in November that will keep De Gea under contract until summer 2020, United are still yet to have come to an agreement with the goalkeeper and his agent Jorge Mendes.

The offer on the table is apparently £350,000, which would make De Gea that best-paid goalkeeper in the world, but the feeling is that United are the more likely to blink first and increase their offer offer.

It’s as though Mendes’ negotiating position gets stronger the longer they leave it so he’s intentionally dragging things out or something. Who could possibly say.

PLACE YOUR BETS FOR WHICH PUNDIT WILL BE FIRST TO CALL HIM ‘TIERAN KIERNEY’
Scottish football may not be what it once was, but they’re sure doing a roaring trade in left-backs.

Arsenal have taken note of the excellent form of Celtic’s Kieran Tierney, and the Scottish Sun (which would more fittingly be called The Drizzle, if you think about it) report that they are ready to match the Glasgow club’s valuation of £25m.

The 21-year-old may well be looking for a new challenge anyway following the departure of manager Brendan Rodgers to Leicester, while Arsenal will see Tierney as a clear upgrade on Nacho Monreal and Sead Kolasinac.

THERE AREN’T ENOUGH FOOTBALLERS CALLED ‘IVAN’, ARE THERE?
Manchester United are one of a number of clubs after Ivan Rakitic, who doesn’t want to leave Barcelona but might be pushed out anyway.

Ed Woodward had better get his skates on, though; not just because that is a hilarious image that we desperately want to see, but because Gazetta Dello Sport reckon that Inter have already opened negotiations with the Spanish club.

Barca’s valuation is reportedly in the region of £30-£39m, which seems like a lot for a 30 year old, but the world stopped making sense long ago, so fine, whatever.

AND THE REST
Juventus don’t want Gonzalo Higuain back from Chelsea, saying “he’s ugly and he smells” (OK not really but imagine though)…Tottenham ‘striker’ Fernando Llorente would like to retire at Athletic Club, bless him…Bayern Munich will trigger Lucas Hernandez’s €80m release clause to sign him from Atletico…Southampton are after RB Lepizig striker Jean-Kevin Augustin…Napoli want Mauro Icardi but Inter would prefer he went to Juventus…Watford want Boavista defender Goncalo Cardoso.