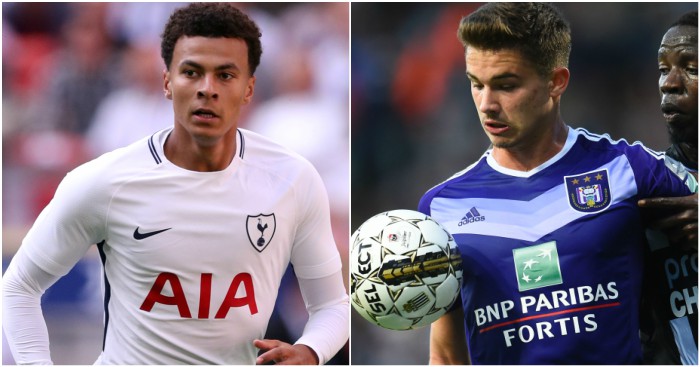 DELE ALLI EYES 220 PER CENT PAY RISE
There may be trouble ahead between Tottenham and Dele Alli.

Numerous reports on Saturday suggest the England star will go looking for another salary increase – one that will see him become the club’s highest paid player, above Harry Kane.

Alli, who still has four years remaining on the terms he signed last year, is said to be on around £50,000 a week, which makes him one of the squad’s lowest paid players when he goes on international duty. Poor Dele…

But, according to The Sun, Alli is said to be looking for a raise to around £160,000 a week, knowing full well he could get more elsewhere.

The former MK Dons midfielder might want to pull his finger out on the field if he wants to strengthen his bargaining position, but Alli will be sitting very comfortably, knowing that Real Madrid are apparently monitoring the situation.

DENDONCKER DERBY DING-DONG
Leander Dendoncker has been on Manchester United’s radar seemingly since the dawn of time. But the Red Devils have never firmed up their interest in the form of an offer to Anderlecht. Manchester City’s reported interest may well change that…

According to The Sun, Pep Guardiola is taking an interest in the 22-year-old, with both Manchester clubs said to have sent scouts to Anderlecht’s clash with Mechelen tonight.

Those scouts will be in good company. Representatives from Borussia Dortmund, Bayer Leverkusen, Atletico Madrid, Marseille, Rennes, Heerenveen and AZ Alkmaar will also be in attendance to watch a player who still has over three years remaining on his contract and is supposedly rated at around £30million.

COUTINHO’S CHRISTMAS BONUS
Joy to the world! The summer’s most protracted transfer saga appears likely to make a yuletide return.

According to Marca, Barca have drawn up a Christmas wishlist, which features Philippe Coutinho at the top of it.

Barca admit that a deal for the Liverpool playmaker would be ‘very difficult’, with the Reds having seemingly even less motivation to sell in the winter than during the summer.

So it seems like a non-story, but it wouldn’t be transfer window without Barca p*ssing someone off…

AND THE REST
Liverpool will do battle with Arsenal to sign Thomas Lemar from Monaco next summer…Arsenal are watching Napoli defender Nikola Maksimovic and could bid in January…Juventus are prepared to wait until next summer to sign Liverpool’s Emre Can on a free…Bacary Sagna is set to reject a move to Leicester preferring AC Milan or Inter Milan instead…Newcastle are interested in signing Besiktas striker Cenk Tosun…West Ham are set to sell Reece Oxford in January…AC Milan say they do not want Chelsea boss Antonio Conte to replace Vincenzo Montella…Real Madrid are not prepared to match Manchester United’s planned £169m bid for Harry Kane…Manchester United keeper Dean Henderson is wanted by several clubs, including Arsenal, Tottenham, Chelsea, Watford, Stoke, West Brom and Southampton.