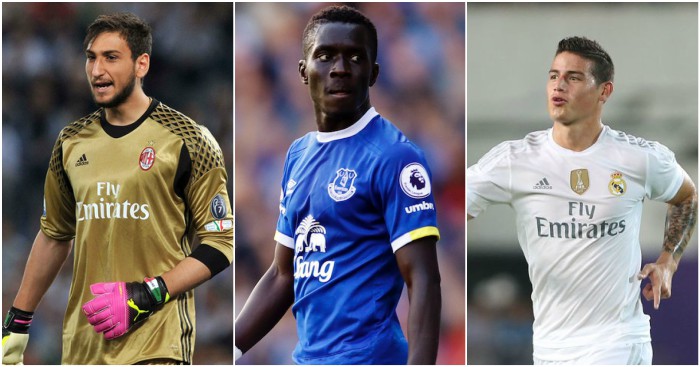 PREMIER LEAGUE CLUBS CHASE DONNARUMMA
We start with the Sunday Mirror and John Richardson, who claims that Manchester United, Chelsea and Manchester City are all chasing Milan goalkeeper Gianluigi Donnarumma.

The story stems from reported Real Madrid interest in David de Gea and Thibaut Courtois. Whichever of those goalkeepers does move to Spain may be replaced by 18-year-old Donnarumma, although Milan presumably do have some say.

United have actually been mentioned before with a move should De Gea leave, but City is a new name. There is certainly a fair chance that Pep Guardiola will want a new goalkeeper this summer.

AND EVERYONE WANTS RODRIGUEZ TOO
We’re sticking with the Sunday Mirror, and this time it’s our old friend Steve Stammers. We have regularly expressed our surprise at the contacts Stammers appears to have at the biggest clubs across Europe, given that he regularly reports transfer news that no other paper or journalist, at home or abroad, picks up on. Let’s just say we are a little wary.

In fact, the only real news is that James Rodriguez will probably want to leave Real Madrid this summer, something that became pretty obvious when he stopped getting into the Madrid team. The story is light on detail, but says that Real will be looking to recoup a big fee, and that Premier League clubs with battle with each other to sign him.

GUEYE THE ANSWER FOR ARSENAL’S MIDFIELD?
A much more intriguing line comes from Tom Hopkinson in the Sunday People, who claims that Arsene Wenger is poised to make a summer move for Everton midfielder Idrissa Gueye.

‘He wants to add more defensive stability to his group and is targeting Gueye, who is out of the N’Golo Kante mould,’ writes Hopkinson.

Gueye cost Everton £9m from Aston Villa, and would presumably cost Arsenal far more than double that fee. He is also 27.

Hopkinson also mentions that Jose Mourinho likes Gueye, while reporting that RB Leipzig, Sevilla and Valencia all want him.

MOURINHO EYEING SIDIBE AND MENDY
Speaking of Mourinho takes us to The Sun, and an exclusive from Mike McGrath. He is another whose record on transfers is less than perfect, even accounting for the fact that clearly not every transfer comes off and information can be duff.

Anyway, McGrath writes that Mourinho wants both of Monaco’s full-backs Djibril Sidibe and Benjamin Mendy as part of his overhaul this summer at Manchester United. Perhaps when Mourinho has a completely new squad we will be allowed to judge United’s Premier League performance?

McGrath says that the pair could cost £33m, which seems on the low side given the hype around Mendy in particular. At 24 and 22, surely Monaco would hold out for more money?

AND THE REST
West Ham are leading a three-way fight to land Wilfried Bony this summer… Aitor Karanka has been offered the chance to reunite with Jose Mourinho at Manchester United… West Ham want to sign Jack Wilshere from Arsenal this summer… Manchester City are closing in on a £25m deal for Sporting Lisbon’s William Carvalho… West Brom are willing to pay £20m for Troy Deeney… Manchester City boss Pep Guardiola is ready to enter the race for England star Michael Keane.