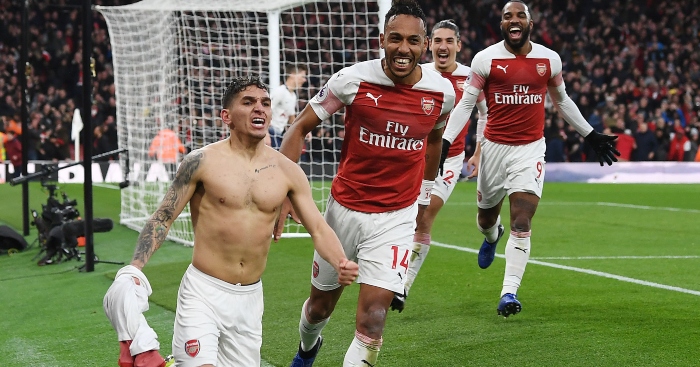 THREE OUT, ONE IN AT ARSENAL?
Most of the talk around Arsenal in recent weeks has surrounded the future of the manager. This morning, the whispers focus on the future of three of their international stars.

Firstly, The Times reckons Granit Xhaka could try to get as far as he can from the Emirates, at least without leaving the Premier League. Apparently, the Gunners expect their ex-captain to seek a move in January and Newcastle could offer him that escape route. Xhaka is said to be concerned about the consequences for his Switzerland place should he fail to win his place back. And there appears little chance of a reconciliation between him and the Arsenal fans.

Might Xhaka’s exit provide Lucas Torreira with a regular first-team place? Not if he doesn’t stick around. After being given only three Premier League starts this season, Torreira is reported by TMW to have a meeting scheduled next week with Unai Emery to discuss his concerns. Presumably that summit will be done by Skype since Torreira is due to be away with Uruguay next week.

Doubts also surround Pierre-Emerick Aubameyang’s future. The striker was recently named Arsenal skipper after Xhaka lost his sh*t a fortnight ago, but the armband might be wrapped around another bicep by next season if El Chiringuito is anything to go by. They claim Barcelona are ready to make a move, perhaps as early in January, since Luis Suarez is getting on a bit. Suarez is 32; Aubameyang will be 31 by the time next season kicks off.

One possible incoming at Arsenal: The Sun reckons they will take on West Ham in the race to sign Eintracht Frankfurt defender Martin Hinteregger for around £22million.

IBRA BACK TO ITALY
Where will Zlatan rock up next? The MLS commissioner may have let the cat out of the bag…

Ibrahimovic is out of contract at LA Galaxy next month and free to go where he likes. Don Garber seems to think that means a return to AC Milan for the 38-year-old. He told ESPN that Ibra “is now being recruited by Milan, one of the biggest clubs in the world.”

HAALAND SET FOR SMALLER STEP?
Another striker set to be on the move is Erling Haaland. The Norwegian, half the age of Zlatan, is being linked with just about everybody, including Man Utd, Liverpool, Arsenal, Real Madrid, Barcelona and Juventus. But Sky Sports reckons RB Salzburg might keep him in the family.

Haaland is said to be considering taking a smaller step to RB Leipzig, with the report claiming the 19-year-old ‘could be attracted by playing alongside other emerging talent like Timo Werner’.

Surely Haaland would be a replacement for Werner rather than a partner? Werner is also wanted by Man Utd and Liverpool, but the Germany striker seems destined for Bayern Munich.

AND THE REST
Pep Guardiola fancies a stint managing in Italy… Man Utd, Spurs and Wolves are in the running to sign James Rodriguez from Real Madrid…
Crystal Palace are keen on Wolfsburg striker Wout Weghorst… Bournemouth and Wolves are interested in Huddersfield striker Karlan Grant.