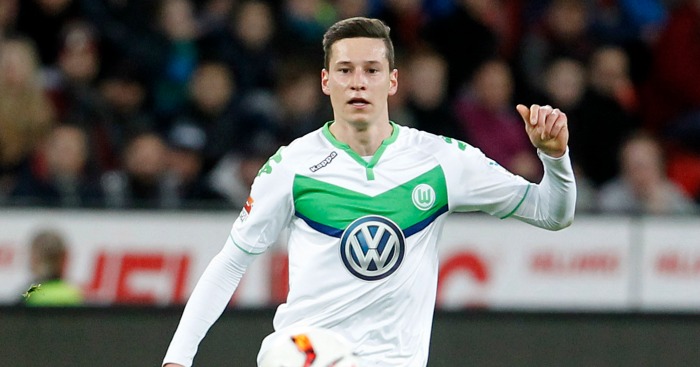 EVERTON MAKE DRAXLER MOVE?
We can’t help feeling that Everton have gone for the wrong transfer targets this summer. We’ve heard of interest in high-profile players, but then that interest has come to the sum total of nowt. Thursday brings another example.

The Independent report that Everton have made an approach to sign Wolfsburg’s Germany international Julian Draxler. That’s the same Draxler who has a release clause of £63m.

On Wednesday, an interview with Draxler was published in which he explained how keen he was to leave Wolfsburg, and Arsenal have regularly been mentioned with a move.

That’s all very well, but Wolfsburg don’t particularly want to sell. The Daily Mirror report that Draxler has been told he is going nowhere.

Still, that doesn’t change the fact that Everton have made the first move. Big talk, but can they walk the walk?

JANUZAJ CAN LEAVE FOR £10M
One player Everton could be interested in is Adnan Januzaj, with the Belgian emphatically unwanted at Manchester United.

David Moyes’ Sunderland are reportedly interested in taking Januzaj on loan, but The Sun say that the player is not interested in another loan move.

The Sun’s story is remarkably low on detail, but then drops in the line that Januzaj would be free to leave Old Trafford permanently for a fee of £10m. That seems about right, actually.

Cast your minds back to February 2014, when stories broke of Paris St Germain interest in Januzaj. ‘Man Utd will reject £40m Adnan Januzaj bid from PSG’ were the widespread headlines.

Reckon they wish they had taken the cash now?

TOTTENHAM STEP UP RAFA SILVA INTEREST
To the Daily Mirror now, and their claim that Mauricio Pochettino is not finished in the transfer market quite yet.

Pochettino has so far signed Vincent Jannsen and Victor Wanyama, with Georges-Kévin N’Koudou’s medical taking about a fortnight to complete. Reports in France suggest that move may in fact collapse.

Instead, the Mirror mention that Sporting Braga midfielder Rafa Silva might be the solution. Silva was part of Portugal’s European Championship-winning squad, and has been linked with a move to Porto this summer.

Darren Lewis, who writes the story, actually mentions N’Koudou as a done deal, so perhaps Silva is an addition rather than an alternative?

EVERTON AND SUNDERLAND IN FOR BENTEKE
Everton could make a move for Liverpool’s Christian Benteke, but face competition for the striker’s signature from former manager David Moyes.

According to the Daily Mirror, Everton have lined up Benteke to replace Romelu Lukaku, who could rejoin Chelsea if his former club meet the £75million asking price. Let’s face it, Benteke isn’t wanted at Liverpool.

However, Moyes is eager to recruit a new striker to ease the burden on Jermain Defoe after taking over at Sunderland. That’s completely logical, because Fabio Borini.

“It’s well documented we’ve only got one centre-forward in Jermain Defoe – we’ve others who can do the job at times. But I would like to strengthen in most areas if it comes up,” Moyes said earlier this week.

Crystal Palace have already come close to signing Benteke and were ready to meet the 25-year-old’s £120,000-a-week wages, but failed to agree a fee with Liverpool. West Ham have also been mentioned in more than passing.

AND THE REST
West Ham hope to sign both Andre Ayew from Swansea for £16million and the forward’s brother, Jordan, in an £8million deal from Aston Villa…Manchester City will continue their summer spending with the £15million capture of 19-year-old Atletico Nacional striker Marlos Moreno… Former Newcastle defender Davide Santon is set to join West Ham on loan from Inter Milan…Hull have rejected a second mid worth £5million from Middlesbrough for centre-back Harry Maguire…Rubin Zazan midfielder Yann M’Vila is set to return to Sunderland on a permanent basis as David Moyes’ first signing as new manager…Moyes is also considering handing a 12-month contract to former Everton midfielder Steven Pienaar…West Brom could unveil the £16million signing of West Ham striker Diafra Sakho today…Burnley have entered the race with Southampton to sign Anderlecht midfielder Steven Defour.