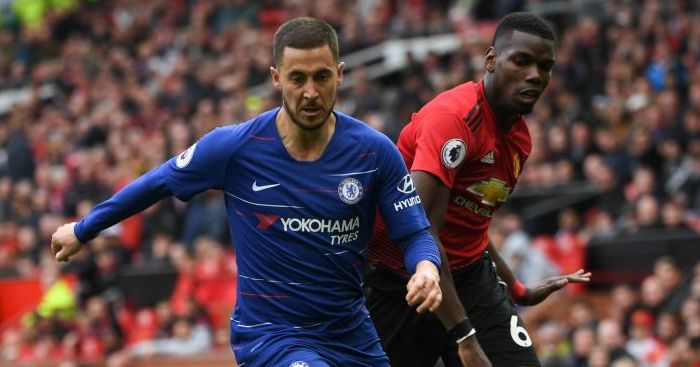 HAZARD FAWNING
Of all the most popular transfer market tropes, this is perhaps our favourite of the genre: pretending that a wantaway player being pictured in his current club’s new kit suggests he will stay.

The Daily Express have even lost heart in this story with the headline. ‘Eden Hazard pictured in new Chelsea kit leak as fans hope it suggests transfer hint,’ it says, although the URL is a little sexier:

The story is based on Twitter users pointing out that Hazard modelling the club’s new kit is a clear indication he will stay at Chelsea this summer instead of moving to Real Madrid. Because that’s definitely how this works.

HAZARD WARMING
The Express website has another update on the situation, going as far as to claim that the Belgian has ‘dropped a hint’ over where he will play next season. This should be good.

‘CHELSEA star Eden Hazard hinted that he will STAY at the club following the Blues’ 1-1 draw with Manchester United at Old Trafford,’ reads the first paragraph, which clearly wants you to read 16 Conclusions. They have some lovely post-match quotes.

And that is the big HINT. That is not Hazard promising to help Chelsea qualify for the Champions League, nor is it him saying exactly the right things to placate all parties while his future remains up in the air. No, that is a HINT that he is staying next season. If only he had said all that while wearing the club’s new kit.

ON THE MEND
Sunday morning (rain is falling) brought news of Manchester City’s interest in Harry Maguire. It was said that the current Premier League leaders would likely have to break Virgil van Dijk’s world-record fee for a defender to land the jolly Leicester giant, with City eager to reinforce their backline.

Aymeric Laporte has had a couple of questionable performances recently, Vincent Kompany is no longer of the required standard to be a regular starter, and John Stones seems weirdly broken. As for Nicolas Otamendi, his spell at the Etihad ‘is over’.

The Daily Star quote ‘the Argentinean version of Marca’ – something we were not aware was a thing – as saying that ‘the player wants out of City’ as part of a quest to play more often and retain his international place.

The link they use in the story is broken, which is useful and does not lead us to believe the whole thing is a crock of sh*te at all. But apparently West Ham (obviously), Wolves and River Plate would all be interested in the 31-year-old, who would prefer to stay in Europe.

AND THE REST
English goalkeeper Joe Hart, 32, could be allowed to leave Burnley on a free transfer this summer, with several Ligue 1 clubs interested… Chelsea manager Maurizio Sarri has been identified as a possible replacement for AC Milan boss Gennaro Gattuso… Bournemouth are interested in signing Irish West Brom centre-back Dara O’Shea, 20, who has spent the season on loan at League Two side Exeter City… Barcelona and Netherlands goalkeeper Jasper Cillessen, 30, says he wants to leave the Nou Camp this summer, having failed to oust first-choice Marc-Andre ter Stegen.