Home All The News Gossip: ‘European superpowers want The Ox’ 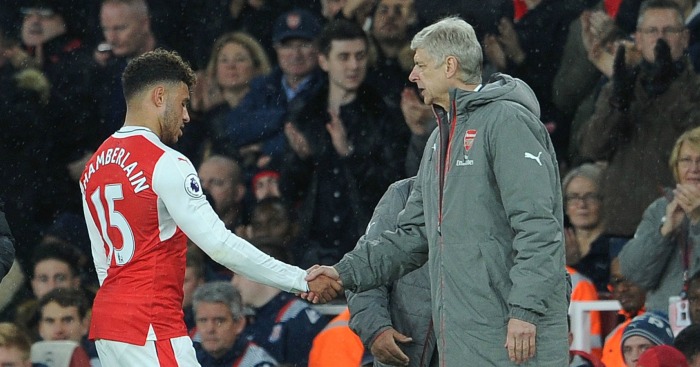 THE OX ‘FRUSTRATED AND BEMUSED’
Now this quite the coincidence as we have often been ‘frustrated and bemused’ by Alex Oxlade-Chamberlain over the years. It seems that his confusion comes from Arsene Wenger suggesting that negotiations have started on a new contract, and John Cross of the Daily Mirror ‘understands’ otherwise.

The Ox has completed only one full 90 minutes in the Premier League this season and was again substituted on Saturday against Stoke. The Mirror suggests that ‘European superpowers’ would be interested, which amuses us greatly. Does that mean Barcelona? Bayern Munich?

BAZOER FOR ARSENAL?
This feels like a bit of a leap but The Sun are claiming that ‘ARSENAL have moved one step closer to landing Riechedly Bazoer after Ajax’s head coach confirmed he is in the “final phase” of a January transfer’. He has indeed said such a thing but there has been no mention of Arsenal.

Liverpool and AC Milan have also been linked with the midfielder but the presence of Marc Overmars at the club has swayed The Sun into billing this as ‘Arsenal transfer news’. Bazoer is a Dutch international despite being just 20.

EVER FOR EVERTON
This makes sense after the sh*t-show that was Everton on Saturday against Watford. Ever Banega has only been at Inter Milan since the summer but he has struggled (just one Serie A goal) as Inter have struggled. Inter are happy to recoup £8m for a player recruited for nothing just a few months ago.

Everton’s problem might be that more attractive clubs in France and Spain are interested in the Argentine international, but the Mirror say that talks have begun with his agent.

AND THE REST
Stoke boss Mark Hughes is hopeful of making on-loan Porto defender Bruno Martins Indi a permanent member of his squad…Celtic manager Brendan Rodgers has been given a boost in his pursuit of Everton’s 26-year-old midfielder James McCarthy…Aston Villa could try to sign Arsenal and England right-back Carl Jenkinson, 24, on loan…Manchester City manager Pep Guardiola will be given £20m to replace 31-year-old France left-back Gael Clichy in January.