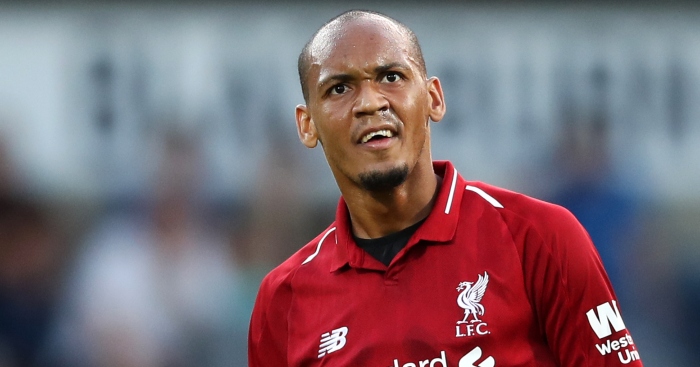 FABINHO ON THE MOVE ALREADY?
Only the most ardent Klopp-ite will argue that Fabinho’s move has gone precisely to plan so far. The £43million signing from Monaco wasn’t trusted to play in the Premier League until a month ago, but since his debut at Huddersfield the Brazilian midfielder has featured in five out of six matches, starting four of them.

So reports this morning of interest from AC Milan are timed rather peculiarly. According to Corriere dello Sport, the Rossoneri are monitoring Fabinho’s situation very closely. Their story suggests that the midfielder remains wary of returning to the bench, with the 25-year-old desperate to keep playing.

With a view to a loan move in January, Milan are hoping Fabinho might push to leave Anfield already should his involvement be curtailed before the New Year. It sounds very much like the Italians are pissing in the wind because it seems most unlikely that Jurgen Klopp would consider being without a central midfielder, especially if he is to continue experimenting with 4-2-3-1.

Milan’s need also doesn’t appear as great as it did. Lucas Biglia is missing for up to four months but at least now Tiemoue Bakayoko appears to be settling in at the San Siro. Like Fabinho, the Chelsea loanee wasn’t trusted to start a league game until last month, but since the win over Genoa on October 31, Bakayoko has played every minute for Milan and his form has been much improved.

GODIN USING UNITED AGAIN?
Manchester United don’t catch on quick. After they were said to have been left furious over being given the run-around by Diego Godin in the summer, reports suggest they are prepared to do the dance all over again.

United were so keen to sign the Uruguay defender that they were arranging to fly him in from Madrid to undergo a medical. But instead, Godin used United’s interest as leverage in his negotiations with Atletico over a new deal.

It turns out, though, that a new contract has not yet been signed. Reports in Spain suggest an agreement is tantalisingly close so perhaps Godin’s camp feel they need to use United again to get the deal over the line.

According to The Mirror, United are taking the bait. Their defensive record this season means Jose Mourinho can’t afford to be proud and he remains keen to sign a 32-year-old centre-back – if not Godin, then Gary Cahill from Chelsea.

AND THE REST
Bayern Munich are confident they will sign Aaron Ramsey from Arsenal... Arsenal and Tottenham are both interested in Eric Bailly… Alexis Sanchez is the lowest he has been since joining Man Utd…Atletico Mineiro full-back Emerson is Chelsea and Arsenal target…Everton have opened talks with Man Utd over a deal for Marcos Rojo…Juventus have been offered Real Madrid goalkeeper Keylor Navas.