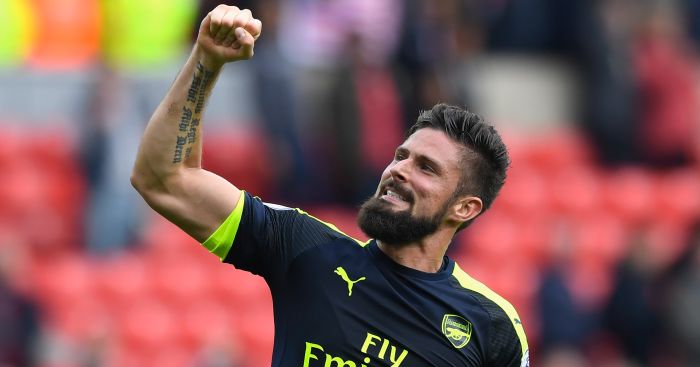 EVERTON PLOT GIROUD MOVE
Well well. With all the talk of Alexis Sanchez, Hector Bellerin and Alex Oxlade-Chamberlain leaving, it’s easy to forget that Olivier Giroud will also probably be out of Arsenal this summer. If Alexandre Lacazette signs, the beautiful Frenchman just isn’t going to get enough starts.

Sunday brings a new name to the mix, and comes via an exclusive from Ken Lawrence in The Sun. Ken also brought us the Romelu Lukaku and Alvaro Morata story below, so he really has been a busy boy.

Lawrence writes that Everton are planning a £20m move for Giroud, to try and move ahead of Marseille and West Ham in the queue. Giroud will become a priority should Lukaku leave.

Everton are already close to announcing the signing of Sandro Ramirez, described by Lawrence as a ‘workhorse centre forward’. A workhorse at 20 – poor lad.

ARSENAL TO MAKE MASSIVE MBAPPE BID
And you can read about those claims here. Good luck to them, we say. But it surely ain’t gonna happen.

LATEST SANCHEZ UPDATES
This one really is going to run and run. On Saturday, BBC Sport’s David Ornstein sent the following tweet:

#AFC made Sanchez big offer, hope he stays. But if set on leaving + fee acceptable possible he'll go this summer rather than free next #MCFC

The rough translation of that seems to be that Sanchez will be sold this summer, despite the club repeatedly saying that he wouldn’t be. Still, classic Arsenal.

By Sunday, the London Evening Standard are saying that Bayern Munich might make a bid because Carlo Ancelotti called Sanchez a “great player”, which is some desperate reaching. The Mail on Sunday say that Arsene Wenger is sticking to his guns on not selling Sanchez to a Premier League rival, which does make sense. Can he hold out on that promise, though?

MOURINHO WANTS LUKAKU AND MORATA AT UNITED
And that’s a story you can, nay must, read about here. It smacks of the most dreadful guff.

COSTA ON VERGE OF ATLETICO MOVE
Finally, Diego Costa looks set to get his move to Atletico Madrid. Spanish newspaper AS writes that Diego Simeone is determined to land the Chelsea striker, who is unwanted by Antonio Conte.

Atletico are currently banned from registering players, but that doesn’t seem to bother anyone. They will simply sign Costa and then give him five months to train with the club before making his second debut. Imagine how bloody fired up he’s going to be…

The initial plan was for Costa to be loaned out to China or Brazil to get some competitive action before January, but that has now been shelved.