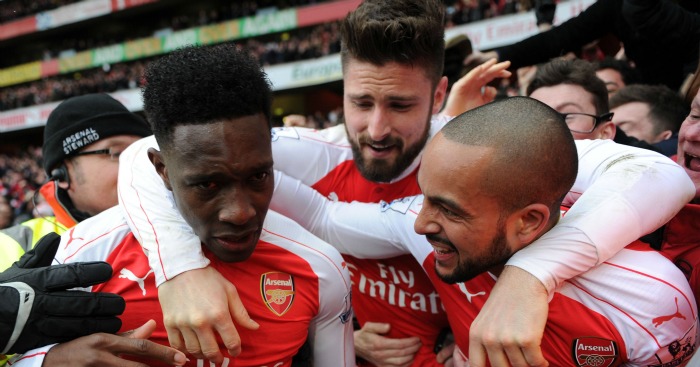 WEST HAM PREPARED TO PAY BIG FOR GIROUD AND WALCOTT
West Ham supporters will remember last summer, when their club publicly proclaimed their interest in several high-profile players only to be left with the remnants of the bargain bin. Is it happening again? Yeah, maybe.

Reports on Tuesday say that West Ham are prepared to break their transfer record to sign Giroud, paying a £20m fee and offering him £120,000 a week. They are also prepared to pay £30m to sign Theo Walcott.

In truth, neither of those fees are ridiculous given the standard of player concerned. It’s just that you can’t help thinking both Giroud and Walcott might have ideas slightly above West Ham’s station, leading to them being rejected and thus paying £25m for a La Liga striker who has scored fewer than 20 goals in the last two seasons combined.

CHELSEA ARE INTERESTED IN VITOLO
It’s pretty hard finding new names in the newspapers. As little actually happens despite the constant churn of rumours, the same players get recycled on an almost daily basis with even the smallest of apparent updates or developments sparking back-page headlines. God I miss actual football so f**king much.

Still, just as you’re losing faith in the whole god damn business there is a new-ish name linked with Chelsea. In the Daily Mirror, Darren Lewis writes that Antonio Conte is considering making a bid for Sevilla winger Vitolo, who has a £35m release clause.

Vitolo is 27, has 11 caps for Spain, won three Europa League titles in a row with Sevilla and plays in roughly the same position as Eden Hazard. Even back-up options are bloody expensive now.

LIVERPOOL MAKE THEIR MOVE FOR OXLADE-CHAMBERLAIN
We’ve long admired the work of Alex Oxlade-Chamberlain’s agent and his ability to drum up interest from elite clubs in a midfielder who has struggled to get into Arsenal’s first-choice team over the last three years.

The latest update, as per the Daily Mirror, is that Liverpool have a made a ‘direct enquiry’ to Arsenal over Oxlade-Chamberlain. That made me think two things: 1) What is an indirect enquiry? 2) If they want him, why not just make a bloody offer?

We’re then told that this is the first step to Liverpool pulling off a ‘remarkable coup’. Are we thinking of a different Alex Oxlade-Chamberlain? A ‘remarkable coup’ would be signing Kylian Mbappe, not a player who started 16 league games for the team that finished fifth last season

AND THE REST
Manchester City are confident of signing Juventus’ Brazilian full-back Dani Alves this week… Leicester City will have to pay at least £40m if they want Gylfi Sigurdsson… West Ham are interested in Sampdoria’s 26-year-old Colombian striker Luis Muriel… Tottenham have been told they will need to pay £26m to sign Adrien Silva… Trabzonspor are in talks with Liverpool about signing Brazilian midfielder Lucas Leiva… Everton are not looking to sign Marcelo Brozovic… Burnley are favourites to sign Charlie Taylor when his contract at Leeds expires.