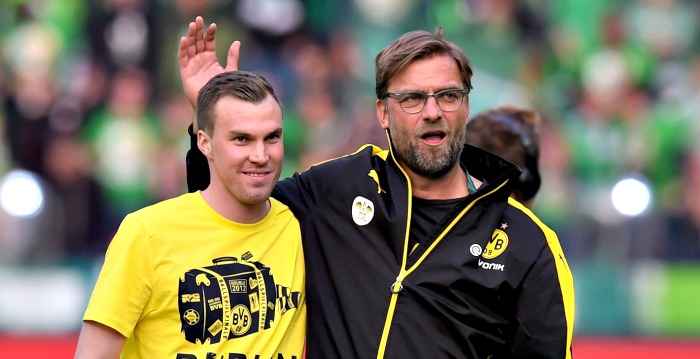 WE NEED TO TALK ABOUT KEVIN GROSSKREUTZ
He may not be as sexy a name as Mats Hummels, Ilkay Gundogan or Marco Reus, but Jurgen Klopp has reportedly agreed a deal to sign one of his former Borussia Dortmund players.

The man in question is Kevin Grosskreutz, and according to Turkish outlet Takvim, the German has agreed a three-year deal with Liverpool.

Grosskreutz, a World Cup winner with Germany 18 months ago, has endured a difficult season. The 27-year-old fell out with new Dortmund manager Thomas Tuchel in the summer due to a series of disagreements, as well as ongoing injury issues. As a result, the Bundesliga club sold him to Galatasaray. Or so they thought. The Turkish side failed to deliver the necessary paperwork to FIFA in time for the deal to be completed, but Grosskreutz moved to Turkey as part of the agreement between the two clubs, despite not officially signing. Grosskreutz will sign for Galatasaray in January, but it’s already believed that Liverpool will move to strike a deal.

Considering Grosskreutz has not played for Galatasaray, he would be allowed to represent Liverpool this season, as per FIFA rules. They state that a player can be registered with three different clubs in one season, but is only permitted to play for two.

Takvim add that Grosskreutz, who is predominantly a winger but can play in both defence and attack, could join the Reds for as little as €2.5million (£1.8million) within the next 10 days.

NO SPURS FOR SAIDO
It really has all gone wrong for Saido Berahino, hasn’t it? After appearing in each of West Brom’s Premier League games last season, scoring 14 goals, the Burundi-born Englishman was heavily linked with a move to Tottenham in the summer. As we know, a deal never materialised, and Berahino vowed to ‘never play Jeremy Peace again’, much to the disappointment of the West Brom chairman and his upcoming biopic.

The Burundi-born Englishman has featured just 11 times this campaign, three times on the left wing, scoring three goals. The 22-year-old obviously wants to leave, and manager Tony Pulis seems to be open to the idea of selling him in January in order to fund his own transfers. But club chairman Peace has vowed not to do business with Spurs, according to the Daily Mirror.

‘There remains a bitter stand-off’ between Peace and Levy, writes John Cross, who adds that while Chelsea are keeping an eye on Berahino, their interest is nowhere near as concrete as that of Spurs. Berahino may have to wait until the summer to leave.

BRENDAN REJECTS SWANSEA
We finish where any football story should, with Brendan Rodgers.

The former Liverpool manager was quickly installed as the favourite to replace the sacked Garry Monk at his former club Swansea. But according to widespread reports, Rodgers has turned down the opportunity.

The Daily Mirror claim this is because Rodgers is considering a lucrative deal in the Middle East, while South Wales Evening Post report that Rodgers feels it is too early to return to management, having been sacked in early October. The Times believe Rodgers has set his sights on replacing Roy Hodgson as England manager, and has thereby rejected Swansea’s advances.

As for Swansea, The Sun says the club are looking abroad for Monk’s replacement. They want a manager with top-flight experience, but the club harbour doubts over the suitability of John Cross’ best mate Gus Poyet, who is currently in charge at Greek side AEK Athens.

AND THE REST
Leicester City are interested in signing former Manchester City midfielder Nigel de Jong from AC Milan as they seek a replacement for Gokhan Inler, who could leave in January…Crystal Palace are set to sign non-league sensation Randall Williams from Tower Hamlets. The 18-year-old was formerly on the books at Tottenham.