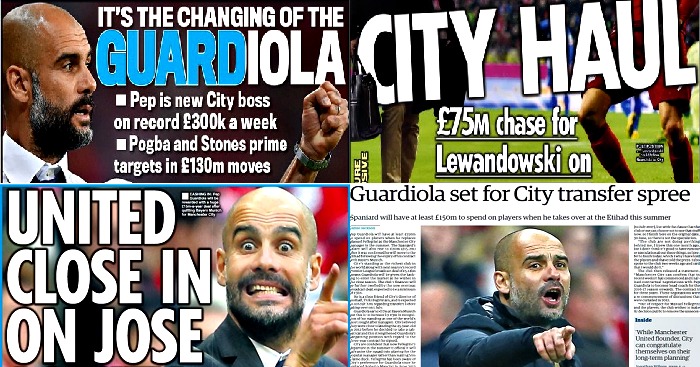 PEP TALK
The January transfer window is shut. As you well know, that does not mean the end of transfer rumours for a few months. Now we look ahead to what could happen in the summer. Bloody football, getting in the way.

Tuesday brings us a rather Manchester City flavoured gossip , what with the club announcing that Pep Guardiola would replace Manuel Pellegrini as manager at the end of the current season. We’ll start with the Spaniard himself, shall we? According to the Daily Star, Manchester United and Chelsea both failed in late attempts to ‘snatch’ Guardiola from City. Jack Wilson claims that both clubs attempted to persuade Guardiola to change his mind, but the manager refused to renege on his agreed deal at the Etihad. Which is weird, because Sky Sports say something rather different. According to those lovely Sky sources, United ‘made no attempt to hijack’ Guardiola’s move to City. Right then.

But the Star’s chief sports writer Jeremy Cross has more. The claim is that Guardiola’s appointment is the realisation of United’s ‘worst nightmare’, and that executive vice-chairman Ed Woodward has now decided that Louis van Gaal must go in the summer. The man to replace him will be Jose Mourinho.

FRIENDS REUNITED
So, who will Guardiola sign as City manager? Well…

First, we go to The Guardian. Manchester correspondent Jamie Jackson has learned exactly how much City will give Guardiola to spend. Somehow. That figure is at least £150million. Does that change if City win the league and the Champions League this season? How does Jackson already know this? Impressive. Who will that money be spent on though? According to the Daily Express, that man will be Neymar. We did tell you. The long-term target recently revealed his admiration for Guardiola, admitting he “would love” to work with him, and the Express believe City are ‘willing to pay’ his £105million buyout clause.

Moving on. The Sun is our next stop, and this one is just as predictable. City have Pep, now they want Lionel Messi.

According to Duncan Wright, City ‘have already sounded out the Barcelona star’s advisors’, and they basically didn’t tell them to f*** off. City are now ‘putting together a £120million deal’, and boy is it ‘stunning’.

The Argentinean is also disillusioned over Barca prioritising contract talks with Neymar over his, while tax evasion charges are starting to really grind Messi’s gears. Fleeing to a different country apparently absolves him.

…DON’T FORGET JOHN AND PAUL
Did you think we were done? We weren’t done. Sit down. Now. The Daily Mail have something important to say.

Ian Ladyman and Neil Ashton have teamed up to tell us that Guardiola will ‘battle Chelsea, Barcelona and Real Madrid’ for Paul Pogba, who is rated by Juventus at £80million, while the Spaniard also wants John Stones of Everton, who is valued – still, somehow – at £50million. The pair add that Messi is considered ‘out of City’s range’, which will come as a surprise to The Sun. But Pogba and Stones are the targets.

LEWANDOWSKI TOO?
We can’t leave without bringing you an EXCLUSIVE from The Sun’s Antony Kastrinakis. His last one went so well, you see.

Kastrinakis claims that Manchester City will move for Robert Lewandowski if Real Madrid, as is expected, do so first. Before City announced Guardiola’s appointment, the Spaniard pledged not to sign any players from current club Bayern Munich, but Kastrinakis has other ideas. If Real open talks with Lewandowski – or Lewy, as we painstakingly see Kastrinakis calls him, City will enter a ‘£75million fight’ for the Pole.

As an aside, City are also linked with David Alaba in the story. They’re signing everyone, basically.

AND THE REST
Manuel Pellegrini’s next job could see him remain in the Premier League with Chelsea, who spoke to the 62-year-old before bringing Jose Mourinho back to the club in 2013…Chelsea captain John Terry, 35, has been offered a move to the Middle East as talks between his advisers and Qatar side Al Arabi – managed by Gianfranco Zola – have taken place…Former England captain Terry could earn £20m by playing just one season in China, although a move to the MLS is also a possible destination…Chelsea will look to Italy for their next manager – with Henry Winter hinting that he thinks Italy head coach Antonio Conte will get the job…On-loan Chelsea striker Radamel Falcao, 29, was in Madrid on transfer deadline day looking to seal a move back to former club Atletico Madrid…Aston Villa manager Remi Garde is prepared to walk out on the club this summer after they failed to sign any of his January targets…Serie A side Lazio blocked moves from Villa and Bournemouth to sign midfielder Ravel Morrison, 22, who will now remain in Italy until the end of the season.