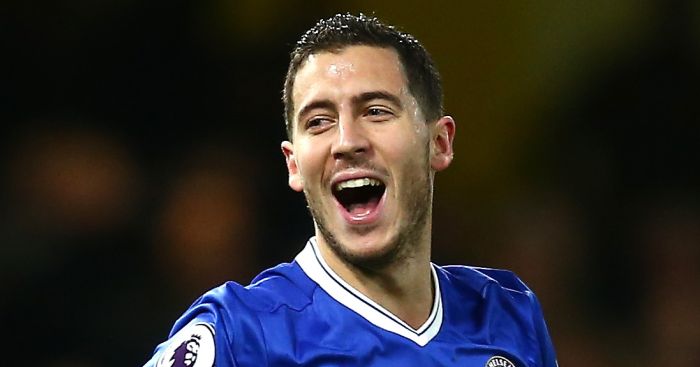 MAN CITY WANT HAZARD. BANG.
Thought you could have a nice gentle start to Sunday, did you? Take a cup of coffee back to bed while you read a few pieces from the FA Cup yesterday, before having bacon and eggs with those English muffins that you really enjoy but always forget to buy? Maybe even a potter around the village in order to justify sitting on the sofa all afternoon? Well not in this parish, sunshine. Because the Sunday Mirror are here to start your Sunday with a bang.

OK, that’s all a bit much. But the Sunday Mirror do claim that Manchester City have made Eden Hazard their top summer transfer target, and are willing to pay £150m to land the Belgian. Told you this one was ballsy.

‘Guardiola agreed with City’s stance on refusing to break the club’s wage structure for Sanchez,’ the report says. ‘At 27, Hazard is seen to represent better value as he enters the peak years of his career.’

Worth pointing out that if City sign Hazard in the summer, he would only be 18 months younger than Sanchez is now. It would be a brave assessment to say that he is still to enter the peak years of his career.

LIVERPOOL BID FOR ROMA KEEPER
It might not have escaped your attention, but Liverpool could do with a goalkeeper. Simon Mignolet is not very good, Loris Karius is not very good and Danny Ward appears to have p*ssed in Jurgen Klopp’s cereal and isn’t being given a chance.

Il Tempo in Italy (nope, us neither) claim that Liverpool have had a bid rejected for Roma goalkeeper Alison, who is 25 and absolutely brilliant.

“I am happy in Rome,’ Alisson told Sky Italia recently. “It’s always a pleasure to feel that lots of people are monitoring you but my head is focused on Roma. I leave my future in the hands of God.” That seems risky, given that God is almost certainly a Liverpool supporter.

Anyway, this move isn’t going to happen in January. Klopp says so, Alisson says so and Roma say so.

JORGINHO AND BARTRA IN AT OLD TRAFFORD. DARMIAN NOT OUT
Spurious Manchester United rumour of the day goes to Rai Sport, who claim that Manchester United are currently in talks with Napoli midfielder about a move to Old Trafford in the summer. He could be the replacement for Michael Carrick, apparently.

Then we have Marca saying that United are one of a number of clubs considering signing Marc Bartra from Borussia Dortmund. That would also be a summer deal, but they face competition from Juventus.

Finally, the Sunday Express say that both Juventus and Roma have made offers to take Matteo Darmian back to Serie A on loan until the end of the season, but with a view to a permanent move. Both of those offers will be rejected, with Jose Mourinho wanting Darmian to stay despite never playing him.

ENRIQUE IN AT CHELSEA
Good line from the Daily Mail, who say that former Barcelona manager Luis Enrique is at the top of Chelsea’s list to replace Antonio Conte.

It is becoming increasingly clear that Conte will leave this summer, ending a strange reign in which he led Chelsea to a surprise league title, setting records in the process, but has waged war with the club about investment in the transfer market.

Enrique is viewed as the favourite because he is currently without a job having left Barcelona last summer. That saves a whacking great compensation payout and protracted negotiations.

AND THE REST
Arsenal will miss out on Pierre-Emerick Aubameyang if they refuse to pay £60m… Javier Pastore does not want to move to the Premier League… Tottenham remain in discussions to sign Lucas Moura from Paris Saint-Germain… Arsenal look likely to sign Jonny Evans, despite him currently being injured… Newcastle and Crystal Palace want to sign Richmond Boakye, the Red Star Belgrade striker.

More from Planet Sport: Revisiting the ’20 future England stars’ picked by The Guardian in 2008 (Planet Football)