Home Chelsea Gossip: Hazard out, Coutinho in at Chelsea; Rice in demand 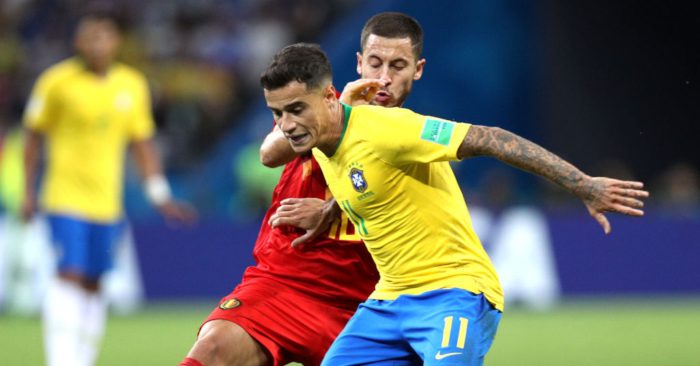 EDEN OUT?
‘Eden Hazard completed his seventh Premier League season as a Chelsea player and then revealed he had informed the club of his desire to leave for Real Madrid,’ is how it begins in the Daily Mail. Well actually he didn’t, that’s the assumption being made on the basis of his quotes given after the 0-0 draw with Leicester City that sealed third place.

This is what he said: “I have made my decision but it is not just about me. I told the club a couple of weeks ago. I wanted it to be cleared up earlier but that’s not happened. I’m still waiting, like the fans are waiting.”

As the Mail say: ‘At 28, he is ready for a new challenge but Real Madrid must still agree a transfer fee to free him from the final year of his contract.’

Maurizio Sarri has already said Chelsea must respect his wishes.

TO BE REPLACED BY…
There is obviously a mighty big ‘if’ in play here as Chelsea must first overturn their transfer ban, but Spanish radio station Cadena Ser say that the only Premier League that has shown any concrete interest in Barcelona man Philippe Coutinho is Chelsea.

Coutinho has been previously linked with Manchester United, but that was something of a red herring; he would not give up Champions League football, especially if that would mean mightily peeing off Liverpool fans.

RICE IN DEMAND
“Maybe some of the big teams, or all of them, will want him. But that is one thing – the other is whether he will stay here or he goes, and I cannot say at this moment,”said Manuel Pellegrini after West Ham ended the season with another victory to lift them into the top half of the table. He knows that they could struggle to keep hold of Declan Rice this summer.

Various reports suggest that Manchester City, Manchester United and Chelsea are all interested in Rice, though those close to the club suggest that the young Irish Englishman is in absolutely no rush to leave.

I think he is just being diplomatic if a 85m bid comes we would have an issue! But Declan doesn’t want to leave and club don’t want to sell so o wouldn’t worry yet https://t.co/FyLVcJNB3T

AND THE REST
Aston Villa want to pay £25m for Chelsea striker Tammy Abraham if they are promoted…Crystal Palace want to keep Michy Batshuayi…Stoke goalkeeper Jack Butland has offers from Bournemouth and Crystal Palace for a return to the Premier League.