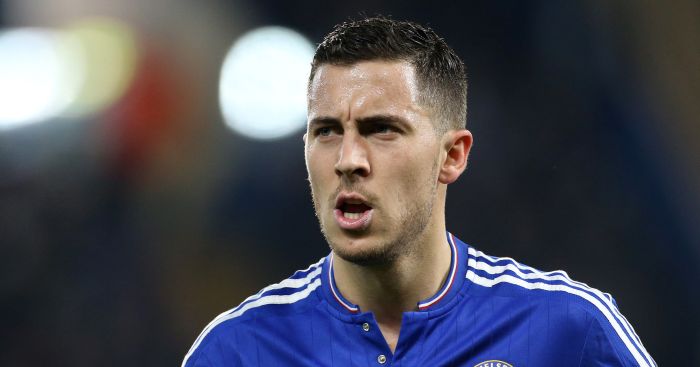 The Nigerian youngster has attracted interest following an impressive season in the Italian capital. The 19-year-old has scored two goals in six Serie A appearances for Roma, scoring 19 times in 18 games for their youth teams.

Sadiq is currently on loan at Roma from Serie B side Spezia but the report claims Roma plan to make his move permanent before immediately selling him on at a profit.

Gazzetta dello Sport state that Roma will sign him for £2m but director of football Walter Sabatini already has a list of teams who want the teenager. It is claimed Roma will want at least £9.6million for Sadiq.

CONTE WANTS HAZARD TO STAY
There have been plenty of rumours regarding Eden Hazard leaving Chelsea this summer, but the Daily Mail believe that the Belgian is going nowhere. They say that Hazard had a chat with Antonio Conte last week, the result of which was the Italian telling him that he wanted him to stay at Stamford Bridge.

One of Chelsea’s biggest issues is that they would want at least £60m for Hazard, and nobody is likely to pay that after such a mediocre season. They might as well keep hold of him and see if this campaign was just a blip.

It does seem likely that Hazard will one day end up at Real Madrid or Paris St Germain, but not this summer.

Pastore arrived at Paris Saint-Germain in 2011 for £30million from Italian club Palermo, but the attacking midfielder is set to be the subject of several transfer bids this summer.

Manchester City are also said to be interested in Pastore when Pep Guardiola arrives at the end of the season. However, it looks as though Chelsea have taken the lead in the race for Pastore’s signature.

According to Italian outlet Tuttomercatoweb, the Blues have contact the 26-year-old’s agent about a move. And PSG are reportedly ready to let their man leave for a fee approaching the £30m they originally paid for him. So there you go.

LIVERPOOL EYE BABACAR
You get the feeling that there could be a decent turnover of strikers at Liverpool this summer. They already have Christian Benteke, Daniel Sturridge, Divock Origi and Danny Ings, but you suspect that at least one of those will leave. You’d forgotten about Ings, hadn’t you?

The Daily Mirror use information from Calciomercato – we get all the Italian gossipers mixed up – regarding Fiorentina striker Khouma Babacar. They say Liverpool are keen.

Now we’re not saying it won’t happen, but Babacar would be a really odd signing. He’s only started 11 games for Fiorentina this season, and only ever scored 13 Serie A goals.

AND THE REST
Manchester United and Chelsea have both expressed interest in signing Paris Saint-Germain defender Marquinhos, who is valued at about £40m… Manchester United have agreed a deal for 16-year-old FC Zurich striker Nishan Burkart… Arsenal and Liverpool are set to do battle for the signature of 15-year-old Fulham left-back Ryan Sessegnon… Paris Saint-Germain are targeting Atletico Madrid forward Antoine Griezmann, 25, and Borussia Dortmund winger Marco Reus, 26, in preparation for the departure of striker Zlatan Ibrahimovic… West Brom boss Tony Pulis says he wants to freshen up the Baggies squad with some young signings this summer in a bid to reduce the average age… Chelsea’s hopes of signing Atletico Madrid’s Jose Gimenez have been dashed as Barcelona and Real Madrid will reportedly bid £50m for the defender… Manchester City chiefs are losing patience with Yaya Toure after the midfielder’s agent launched an attack on the club’s board.