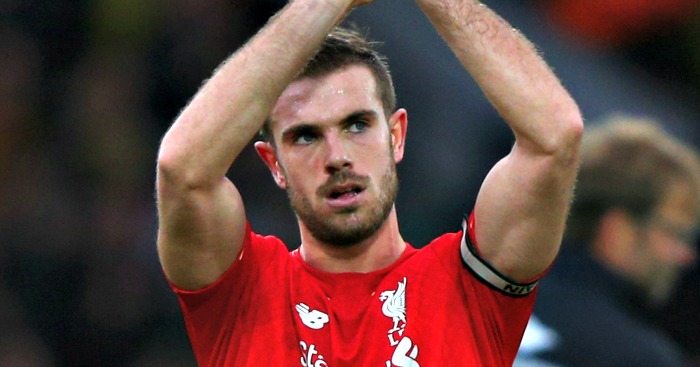 ERM… SPURS WANT JORDAN HENDERSON?
Oh wow. The Sun’s Alan Nixon has a whopping great transfer story, namely that Tottenham want to sign Liverpool captain Jordan Henderson for £25m. Where did this one come from?

‘With Champions League football to offer, Tottenham chiefs think they may have a real chance of pulling off the remarkable coup,’ Nixon writes. ‘Spurs have discussed the swoop at the highest level in the last few days.’

‘So it would be even more important for Levy’s club to make a massive statement of intent by spending big and signing a top player from one of the giants,’ Nixon concludes. Thought they were talking about Jordan Henderson?

Honestly, if Henderson moves to Tottenham this summer then this Gossiper will buy a Spurs shirt with Henderson on the back and wear it non-stop for a week.

Still, nobody on Merseyside is likely to be reading this, so The Sun can’t exactly p*ss them off any more than they have.

After Chelsea were knocked out of the Champions League, one Mailboxer asked why Blanc hadn’t been considered for the Old Trafford gig. He has experience at the top level, played under Alex Ferguson, could bring Zlatan Ibrahimovic with him and isn’t a massive d*ck. All fair points.

The Star on Sunday agree, claiming that Blanc joins Jose Mourinho and Ryan Giggs as under consideration to replace Louis van Gaal in the summer.

We’re unconvinced to be honest, but he’s about twenty times better an option than Giggs.

In fact, Pete Jenson goes ballsier than that, claiming that City are looking to push through an £85m deal for Bonucci and Paul Pogba. We can’t help but think Juventus’ response to that bid might be short and sharp.

Jenson, who is well-connected, believes that Juventus would sell Bonucci for £25m. That does make some sense given that the defender will be 29 by the time any move happens. It’s the Pogba for £60m bit that we can’t get on board with.

PSG DON’T WANT ONE CHELSEA STAR. THEY WANT TWO
Paris Saint-Germain will attempt to sign Eden Hazard and Thibaut Courtois from Chelsea this summer, according to the Sunday Express.

PSG have long been mentioned as suitors for Hazard and are apparently confident they can beat Real Madrid to his signature, believing they can use the Spanish club’s ongoing battle against a transfer ban to their advantage.

PSG, who knocked Chelsea out of the Champions League earlier this week, are also said to be planning a move for Courtois, while Oscar and Diego Costa are other potential high-profile departures having been linked with Juventus and Atletico Madrid respectively.

The newspaper says Loic Remy, Pedro and Nemanja Matic could also join Radamel Falcao and Alexandre Pato in leaving Stamford Bridge this summer as part of a mass exodus. Roman’s not happy, it seems.

AND THE REST
Arsenal have had a £10.25million offer rejected for Roma forward Umar Sadiq, 19… Borussia Monchengladbach midfielder Havard Nordtveit has signed a pre-contract agreement to join West Ham in the summer… Leicester City are closing in on £10million-rated Ajax left-back Mitchell Dijks… Leicester City are ready to smash their record transfer fee this summer in pursuit of CSKA Moscow hit-man Ahmed Musa… Manchester United star Juan Mata wants to sign a new contract in the summer… Adnan Januzaj could be sold if Louis van Gaal remains at Manchester United having been banished by the Dutchman for a “bad attitude”.