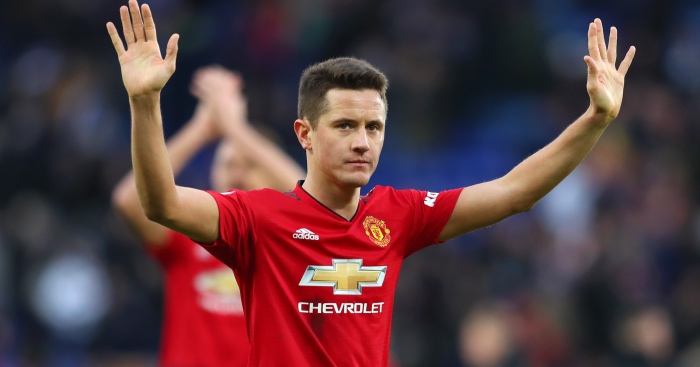 HERRERA HEADING TO PSG
There has been plenty of talk recently that a PSG midfielder could be heading for Manchester United this summer. On Friday morning, the tables have been turned.

The Sun reckons Ander Herrera has decided to decline United’s offer of a new contract and move to Paris instead. Apparently, PSG have offered the Basque midfielder a four-year deal worth £150,000 a week, which is £30,000 a week more than United are willing to pay. Herrera could also pocket a sizeable signing on fee by moving to the Champions League bottlers.

It could be that United and PSG simply exchange free agents. Adrien Rabiot is up for grabs too and United have become one of the lead candidates for the France midfielder’s signature, not that Juventus and Barcelona’s interest has waned.

But Rabiot’s mother, who also acted as his agent, insists no decision has been taken over the 23-year-old’s future because they have had bigger things on their mind. The player’s father died earlier this year so the PSG star’s future was but on the back-burner.

United are also being linked with another midfielder, which will keep Nemanja Vidic happy.

UNITED LINKED WITH TWO MORE
The Evening Standard reports that Sporting Lisbon captain Bruno Fernandes is wanted by Ole Gunnar Solskjaer as he looks to add goals to his engine room. The 24-year-old has 24 goals and 14 assists in 43 appearances this season, which is bloody good going.

Solskjaer hasn’t forgotten that his defence needs reinforcing and United are said to be going back for Harry Maguire. The Daily Star reckons £65million will be enough to sign the England centre-back.

REAL LINE UP HAZARD ALTERNATIVE
Real want Eden Hazard and the Chelsea star has not been subtle in suggesting he wants to go. The Belgium star has only one year remaining on his contract so it seems he holds all the cards. But if Chelsea choose to be stubborn, then Real have a Plan B.

According to Sky Sports, Real are eyeing a £65million move for Felipe Anderson, if a deal for Hazard cannot be done. In that case, West Ham could almost double their money on the attacker they signed from Lazio last summer.

So that’s West Ham, Chelsea, Man Utd, Man City, Liverpool and Tottenham all with reason to be wary of Real this summer.