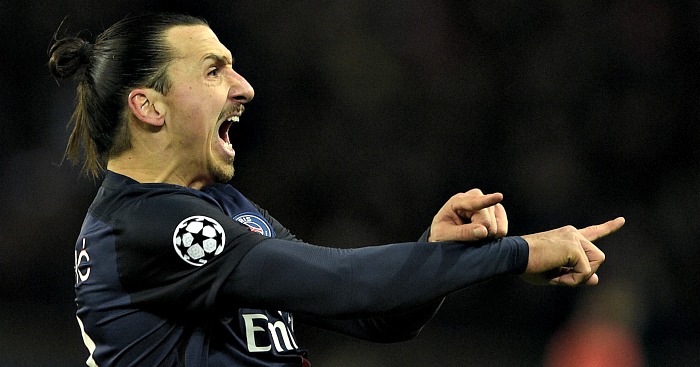 SEXY ZLATAN
Timing is everything. And Zlatan Ibrahimovic has timed his quotes on moving to the Premier League to perfection. With news that Manchester United captain Wayne Rooney would be injured for ‘up to two months’, Paris Saint-Germain striker Ibrahimovic has been busy discussing his future.

Pretty much every British newspaper take the quotes – and will likely run with them into the sunset of the summer transfer window – and most claim that Ibrahimovic ‘sought out the English media’ in the mixed zone after PSG beat Chelsea on Tuesday. Why are these quotes only just appearing then? Oh well.

Ibrahimovic told journalists: “I have another three months here and, then, what will happen? Big things will happen. So let’s see.”

Asked whether the Premier League would be an option, the striker replied: “Let’s just say I am in shape for it.”

Predictably, Manchester United are the club Ibrahimovic is reported to be fluttering his eyelashes at. Frankly, it should be the other way round. The Swedish international’s contract at Parc des Princes expires in the summer, and United have been linked with a move for the 34-year-old for a rather long while. Most newspapers follow the route of Ibrahimovic being ‘reunited’ with Jose Mourinho, who managed him at Inter Milan. Considering how it is being reported as a formality, just imagine if Mourinho doesn’t actually get the job…

AND ON THAT NOTE…
We have a Jose Mourinho update for you. And it’s from The Sun. And you probably already know who has reported it. Yes, it’s Mr. Manchester United exclusive himself, Neil Custis. How does he manage it?

Again, just imagine if Mourinho doesn’t actually get the job.

RED HOT FORMER CHILE MANAGER
More manager news, this time from Stamford Bridge. Matt Law of the Daily Telegraph is reporting that Jorge Sampaoli has become a ‘serious contender’ to be installed as Chelsea manager.

The former Chile boss had previously been spoken of as a candidate alongside Massimiliano Allegri, Antonio Conte and Diego Simeone, but it appears that Sampaoli has won over Chelsea owner Roman Abramovich. According to Law, the ‘energetic, high-pressing football’ Sampaoli adopts is ‘attractive’ to Abramovich.

Combined with the expense involved in bringing Simeone from Atletico Madrid, Juventus’ desire in keeping Allegri as head coach, and internal reservations over Conte’s ‘combative’ nature, Sampaoli has essentially become the default favourite.

Law adds that Mark Hughes of Stokesville, Claudio Ranieri of Leicestertown and Eddie Howe of Bournemouthshire are all on a list of ‘contingency’ managers in case those on the first list all fall through. Still no.

OLD NEWS = NEW NEWS
Let’s conclude with some transfer news. Because this is kind of the transfer gossip after all.

According to The Metro, Manchester United want Ricardo Rodriguez. They will battle with Real Madrid for the Swiss international.

This is certainly not new news, considering Rodriguez has been reported as an Old Trafford target since Luke Shaw was injured in September, and even before then in some quarters.

The Metro attribute their claims to SportBild. We cannot find any reference of ‘Rodriguez to United’ or ‘Rodriguez to Real’ from the German publication. Which is fun.

AND THE REST
Everton are lining up an £8million move for Chelsea goalkeeper Asmir Begovic in the summer…Liverpool are keen on Real Betis goalkeeper Antonio Adan…Bournemouth are ready to splash £3.9million on 18-year-old Polish goalkeeper Bartlomiej Dragowski…West Brom have joined the summer scrap to sign Norway midfielder Havard Nordtveit…Middlesbrough want to sign out-of-favour Swansea City winger Jefferson Montero on loan…Watford midfielder Adlene Guedioura is a loan target for Sheffield Wednesday, Wolves and Derby.