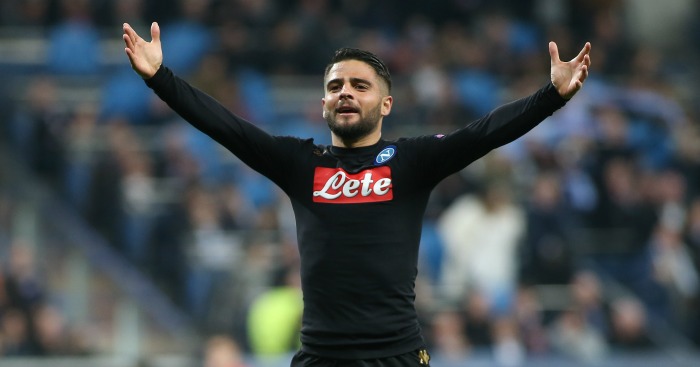 ARSENAL WANT INSIGNE
Well this is a lovely place to start. Lorenzo Insigne has emerged as one of the stars of this season. As Napoli have played beautiful football under Maurizio Sarri, Insigne, Marek Hamsik and Dries Mertens have flourished. Insigne has scored eight goals in Serie A and provided a further six assists, the 25-year-old finally realising the potential many knew he had.

That brings predictable transfer interest from abroad, with The Sun claiming that Arsenal have made Insigne their No. 1 transfer target. They use tweets from Italian journalist Nicolo Schira as evidence.

#Arsenal is set to open talks with Napoli for Lorenzo #Insigne. Gunners scouts have watched him yesterday against Chievo #transfers #AFC

Now we don’t want to pour cold water on that story, but Arsene Wenger is notoriously omnipotent at Arsenal, and that includes deciding which players the club signs. With the current uncertainty over his own future, is it really likely that the club have already decided on their ‘No. 1 transfer target’ for the summer? No, it isn’t.

ARSENAL AND TOTTENHAM SCOUTING DIOP
Another player linked with Arsenal is Issa Diop, the Toulouse defender. However, this story is a little more believable.

France Football say that Arsenal and Tottenham both had scouts in Paris at the weekend to watch Diop play for Toulouse in a 0-0 draw with Paris St Germain, and they liked what they saw.

Still only 20 and standing at 6ft 4in, Diop has been earning rave reviews in France this season. Toulouse are in eighth place in Ligue Un, but have conceded only 28 goals, the fifth lowest in the division. Diop has started 20 of their 26 matches.

A reminder, as ever: Clubs scouting a player does not mean that they are interested in signing him.

OTAMENDI TO REAL MADRID
I mean sure, scouting is a hard business. You can’t expect to have someone at every game watching every player. Still, you might think that at least one Real Madrid scout might have watched Manchester City at least once over the last 12 months. When the two teams met in the Champions League, at least.

It looks like no scouting has taken place, however, because that’s the only explanation for reported Real Madrid interest in Nicolas Otamendi, a defender who has performed only slightly better than Eliaquim Mangala during his time in Manchester.

On Monday, Otamendi’s agent talked about Real Madrid and Barcelona. By Tuesday, plenty of papers report interest from the La Liga leaders. Tip: Don’t always believe an agent who realises his client might soon be dropping out of the Manchester City first team.

SISSOKO ALREADY ON HIS WAY OUT?
Matt Stead might have brought you a list of ten Premier League players you’d forgotten about, but Tottenham supporters might wish to forget the day their club finally realised their squad wasn’t big enough on the final day of the transfer window and splurged £30m on Moussa Sissoko.

It’s gone predictably badly since for a player who had previously spoken at length about how Arsenal was his dream club. Sissoko has barely featured in the Premier League, and has not exactly impressed when he has played.

In the Daily Mirror, Darren Lewis writes that AC Milan would like to sign Sissoko in the summer, after just one season at White Hart Lane. It’s fair to say Lewis may have taken his lead from Calciomercato, who on Monday reported exactly the same story.

AND THE REST
Tottenham expect Schalke to make 22-year-old midfielder Nabil Bentaleb’s loan move permanent… Monaco midfielder Fabinho, 23, says he is open to a move to the Premier League… Southampton’s Cedric Soares, 25, is among the right-backs being watched by Barcelona… Galatasaray winger Bruma wants to join Manchester United (is it that easy?)… Hull City striker Abel Hernandez, 26, is a target for Chinese sides Beijing Guoan and Tianjin Quanjian.