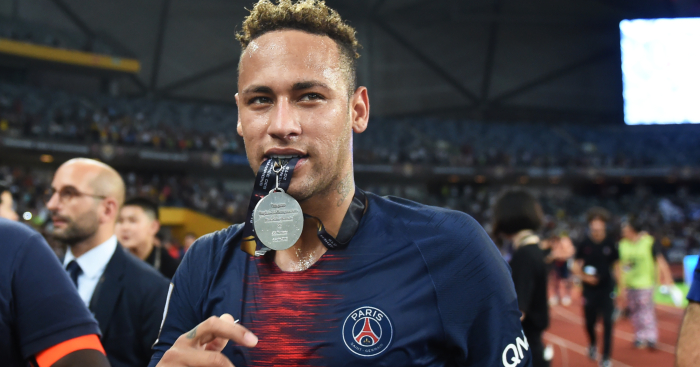 SOME SHUDDERING GUFF ABOUT NEYMAR AND LONDON
You know what, fair play to Express Sport. They usually deal in the kind of ‘Player X sends chilling warning to Club Y’ rubbish that makes us cry a little bit inside for the future of digital journalism, but on Sunday they have themselves an exclusive. And it is the biggest pile of hot nonsense we have heard in a long, long time.

Firstly, the claim: ‘NEYMAR would rather move to Chelsea or Arsenal than one of the Manchester giants’. Wowzers.

Secondly, the use of an ‘insider’. That happens all the time and there is nothing wrong with it, but this insider doesn’t actually say anything about football. Merely that Neymar thinks London is a great place.

“He loves England – but mainly London. He has been there three or four times in the last 12 months,” this source is quoted as saying. “He says there is always something about London.

And that’s it. From that, Express Sport have extrapolated that Neymar prefers a move to Chelsea or Arsenal over Manchester United. Even though none of those three clubs were mentioned, nor any other club for that matter.

Just when you thought you had seen it all, the URL on the story flashes up in front of your eyes: ‘neymar-transfer-exclusive-man-utd’

POGBA COULD MOVE TO JUVENTUS IN JANUARY
Over the last few weeks, Paul Pogba’s potential move to Barcelona has grown as a possibility. Pogba is clearly not completely happy at Manchester United and his relationship with Jose Mourinho is clearly strained. Barcelona have put the wheels in motion by getting their key players to talk up Pogba’s ability.

However, Tuttosport reckon that Barcelona will not have a free path to sign Pogba; Juventus want him too. The Italian newspaper reckon that Pogba will push for a move away from Manchester United because of his problems with Mourinho, and say that he has kept in touch with his former teammates. That’s not really evidence of a move, is it?

Given that United turned down a massive offer from Barcelona in the summer which would surely have to be bettered if they were to let a key player leave mid-season, can’t see it happening. Juventus surely don’t have that kind of cash after buying Cristiano Ronaldo?

TOTTENHAM WANT AJAX STAR
Tottenham have done pretty well out of buying from Ajax, when you consider that they signed Davinson Sanchez, Christian Eriksen and Jan Vertonghen from the Dutch club. There were also rumours that they might move for Matthijs de Ligt if Toby Alderweireld left, although that £40m move never quite materialised.

Now, Spurs are being linked with a £40m move for De Ligt’s teammate Frenkie de Jong. He’s 21, he’s a midfielder and he’s been provoking interest from Barcelona, Borussia Dortmund and Paris Saint-Germain. Fair to say that the lad has talent.

De Jong was linked with a move this summer but decided to stay at Ajax to develop and get first-team football – very sensible. But Tottenham are credited with an interest that they could push through with next summer.

AND THE REST
Britain’s wealthiest man, Sir Jim Ratcliffe, has hinted he is interested in taking over a football club… Gareth Southgate does not believe Jack Wilshere is at the required level to play for England… Chelsea turned down a loan offer from Red Bull Salzburg for young winger Callum Hudson-Odoi.