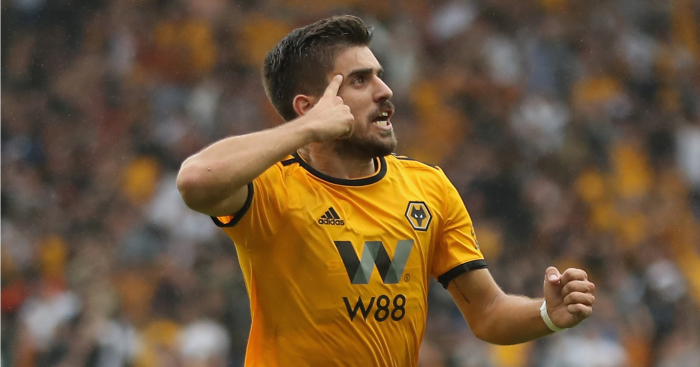 MAN CITY VS MAN UNITED FOR NEVES
We do have a genuinely big transfer story on Thursday, namely potential interest in Ruben Neves in January. One of our ten knee-jerk conclusions after the opening weekend was that Neves would be targeted by an elite club in January, and that looks like coming true.

Manchester City’s interest has been mooted for most of the last week, with Pep Guardiola seeing Neves as the excellent passing central midfielder that he wanted Jorginho to be.

The latest rumour is that Manchester City are worried that neighbours Manchester United will try and hijack any move for Neves. Is this their new scouting technique?

City had shown serious interest in both Alexis Sanchez and Fred before United offered both players considerably more money. City made it clear that they were not bothered if they missed out on the pair, but if the same thing happened for a third time it would surely p*ss them off a bit.

WILL SOMEONE RESCUE CHADLI FROM THE CHAMPIONSHIP?
Less than two months ago, Nacer Chadli was playing for his country in a World Cup semi-final. Now he’s a Championship player with West Brom, still at the Hawthorns with precious little time remaining in the transfer window.

The Daily Telegraph’s John Percy reports that Chadli is facing a nervous 48 hours. The Belgian always expected to leave West Brom this summer, but time is getting a little tight and West Brom have shown no sign of hawking him out.

Chadli is yet to play for the club this season, frozen out after telling them that he wished to leave in July. His wages have been cut following relegation and, having been signed for £18m, West Brom don’t want to let him go on the cheap.

GIROUD DETERMINED TO STAY AT CHELSEA
We hadn’t seriously considered that Olivier Giroud might leave Chelsea before the end of this week, but you can see why the Chelsea striker might be a little concerned. Alvaro Morata is in pretty wretched form and yet has started all of Chelsea’s games so far. If Maurizio Sarri does change that plan, playing Eden Hazard in a false nine role might be the Plan B.

Given that he turns 32 next month, why shouldn’t Giroud see out his contract? Good on him.