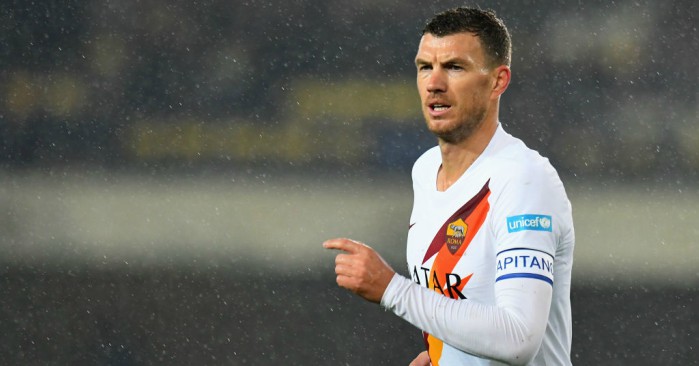 EDIN TO SPURS?
This is intriguing. And straight out of the Jose Mourinho playbook. The Sunday Mirror claims that the new Tottenham manager is very interested in bringing Edin Dzeko back to England. Of course he is. He is 33, a supreme goalscorer and would offer brilliant cover to Harry Kane.

But would Dzeko give up like in Rome, where is still has a lengthy deal and is still first choice, to be Kane’s back-up at Spurs? We shall see…but it’s certainly fascinating.

CHELSEA MAKE CLUB-RECORD BID FOR SANCHO
It feels like we have been relaying this news for an awful long time but the Mail on Sunday are now adamant that Jadon Sancho will move to Chelsea next summer for a club-record fee of over £100m, with Manchester City not interested in buying back the Borussia Dortmund winger.

Sancho was brought up in south London as a Chelsea fan so he is said to be keen to move to the Blues next summer, which is also a blow to Manchester United, who have long dreamed of the England man.

SPURS MOVE FOR MERIH
The triumvirate of Big Six teams currently outside of the Champions League places are reportedly united in their interest in Juventus centre-half Merih Demiral. The 21-year-old Turk moved to the Italian club in the summer but has made only one Serie A appearance for the champions, despite costing around £16m in the summer.

Demiral wants out already and is apparently eyeing a move to the Premier League. Which is handy because Arsenal, Manchester United and now Tottenham are said to be interested in a player that would cost just £15m.

CHELSEA MOVE FOR AKE
While those teams below them scramble around looking at Juventus rejects, Chelsea have an ace up their sleeve: A buy-back clause on Bournemouth defender Nathan Ake that means they could sign him for just £40m, which is well under his market value.

It says in the Telegraph that the move might be dependent on Antonio Rudiger’s fitness, but their vulnerability on Saturday against Everton suggests that they really do need to buy Ake in January regardless. It’s surely a no-brainer.

AND THE REST
Crystal Palace are targeting Burnley’s Dwight McNeil if they lose Wilfried Zaha…Newcastle want Jarrod Bowen…Southampton’s Cedric Soares is a target for AC Milan.