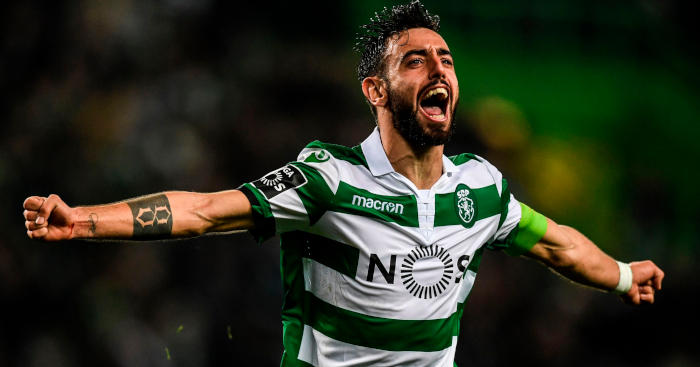 SPORTING REASON TO FLOG FERNANDES
After an almost Bruno Fernandes-free October, the hype is being ratcheted up a notch or two in recent weeks as January creeps closer.

At the weekend, Fernandes spoke of his ‘dreams to fulfil’ while this morning, O Jogo tells us that Sporting Lisbon are ready to sell the midfielder in the new year.

Apparently, Sporting see Fernandes as their ticket to clear around £57million of debt off their books. Though no club yet has demonstrated a willingness to cough up, Manchester United and Tottenham are linked because that’s just how it works.

SMALLING INTERESTS JUVE AND INTER
United could raise a third of the Fernandes fee by selling Chris Smalling. The centre-back is currently on loan at Roma where he is reminding everyone that he isn’t the lumbering lummox he is made out to be.

So much so, Juventus and Inter Milan are said to have taken note of Smalling’s fine form. That’s according to Corriere della Sera, at least.

United are said to want a fee in the region of £20million, which is hardly unreasonable, though Roma were thinking of a figure closer to £13million.

SPURS TARGET ‘BABY MOURINHO’
Many of the other whispers around this morning focus on managerial changes. West Ham are still sweet on Rafa Benitez while the London Stadium burns around Manuel Pellegrini, but most of the noise is centred on Tottenham and Mauricio Pochettino.

The Telegraph says the Spurs manager held talks with Daniel Levy over the last week about his position, with his players exchanging messages while they psyche themselves up for a change. The Daily Mail goes a little stronger, declaring that it is now not ‘if Pochettino’ leaves, but ‘when’.

The Times says something similar, though it is suggested that both parties will tolerate each other until next summer. That would give Spurs the opportunity to recruit their preferred replacement rather than one now on basis of being available.

Apparently, Julian Nagelsmann is high on Levy’s list of candidates. The 32-year-old only took over at RB Leipzig at the start of this season so tempting him away five months after he started the job could be tricky.

AND THE REST
Willian will reject a new deal at Chelsea to join Barcelona on a free… Neymar won’t renew his PSG contract… Paul Pogba would prefer to rejoin Juventus than go to Real Madrid… Chelsea are tracking Genk midfielder Sander Berge… Arsenal will watch RB Salzburg midfielder Dominik Szoboszlai… West Brom will sell Nathan Ferguson in January if he doesn’t sign a new deal… Man Utd are among the clubs monitoring Reading’s Danny Loader.