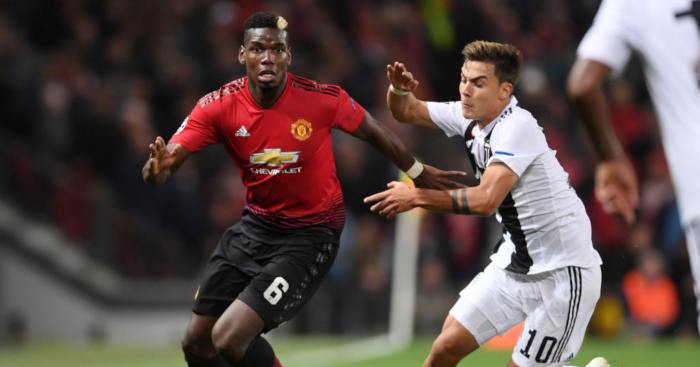 JUVE TO SWAP TWO FOR POG

With the season over we are now deep into transfer silly season. Demonstrated wonderfully by the Sunday Express‘ report that Juventus will offer two players in an effort to ‘steal a march on Real Madrid’ in the battle to sign Manchester United midfielder Paul Pogba.

There has been increased speculation recently that Pogba will leave Old Trafford this summer for Real Madrid with Zinedine Zidane now back at the wheel. However, the Sunday Express reckons that Zidane may need to sell Gareth Bale first to fund a potential £120million transfer for Pogba.

And the report adds that the situation at Real could ‘open the door for Juventus’ with the Red Devils interested in two of their players. United have been linked with both Paulo Dybala and Alex Sandro in the past and Juventus will now propose a ‘mega swap deal’ for Pogba.

Barcelona have been heavy favourites for a while to land Matthijs de Ligt from Ajax but United could reportedly have something to say about that. Catalan radio station RAC1 claims the Premier League side are now in pole position to beat the La Liga outfit to the signing of the 19-year-old.

A report in Sport on Friday claimed United had offered a deal worth £12.3million-a-year which equates to £236,000-per-week as they look to jump the queue for De Ligt. And now RAC1 understands that Ole Gunnar Solskjaer is ‘very close’ to bagging the much-needed central defender on his shopping list.

Barca’s deal is apparently being held up by Mino Raiola as the agent has asked for 20 per cent commission for the deal to go through. That has given United the opportunity to swoop in on the potential €70million (£61.7m) transfer with an offer ‘too good to turn down’.

This one could rumble on through the summer…

NO SILVA LINING FOR CITY

One of the great Premier League players could be leaving this summer if reports in The Sun are to be believed. David Silva is ‘mulling over’ a ‘£12million tax-free retirement jackpot’.

The Spaniard, who has scored 70 goals in 395 appearances for City, has an offer from ‘a club in Qatar’ which could double this wages at City. A City source told The Sun: “It would be a real shock if David does leave but he has had a great offer and is thinking it over hard. At the moment he’s more likely to go than stay.”

And if the Premier League legend does leave then City are lining up reported United target Youri Tielemans, who has been on loan at Leicester City this campaign. The Monaco midfielder is rated at £40million by Monaco and City have ‘already made contact with Tielemans’ people’.