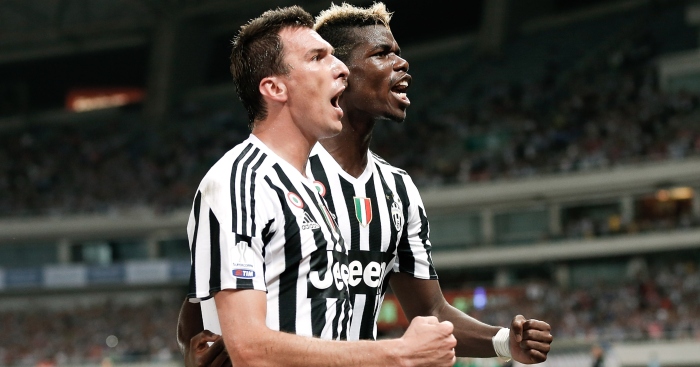 JUVE’S PLAN P
Paul Pogba and Jose Mourinho might never be BFFs but even Mino Raiola admits the pair’s relationship has been “patched up” since the midfielder was said to be “embarrassed” to play for a manager who stripped him of the Manchester United vice-captaincy.

Raiola, however, also mentioned that ‘Juventus remains in Pogba’s heart’ and the feeling certainly appears to be mutual. Juve have been linked with a move for their former midfielder ever since the summer but it remains hard to envisage the Serie A side coming up with the cash to facilitate a straight cash deal.

So, according to the Sunday Express,  Juve sporting director Fabio Paratici has a plan. He will offer Mourinho the choice of Medhi Benatia, Alex Sandro or Mario Mandzukic, plus a hefty cash adjustment, in order to bring Pogba back to Turin.

Juve will have to do better than that. Benatia and Madzukic are 31 and 32 respectively and both have a season and a half remaining on their contracts. Centre-back Benatia can barely get in the Juve side, while Alex Sandro may have been a more tempting offer last summer, prior to Luke Shaw earning a whopping new deal.

CHELSEA LINKED WITH BARCELONA’S SUAREZ
Sorry, not that one…

Denis Suarez is the Barca player being tenuously linked with the Blues this weekend, with the 24-year-old apparently keen to get away form the Nou Camp in January.

You can’t really blame him. Suarez has managed only one appearance in the Barca side all season which came in the Copa del Rey clash against Cultural Leonesa. He struggles to make the bench most weeks having made only four La Liga starts last season.

According to Marca, Chelsea are one of the sides chasing Suarez, along with Napoli and Valencia.

Chelsea’s interest appears to be based on the fact that Maurizio Sarri wanted him while he was managing Napoli. But given that Sarri can barely move for central midfielders at Stamford Bridge, presumably his focus will be elsewhere. Which of Jorginho, N’Golo Kante, Ross Barkley, Mateo Kovacic, Ruben Loftus-Cheek or Cesc Fabregas would be shifted aside for Suarez?

AND THE REST
Arsenal are looking at swapping Aaron Ramsey with Roma and Czech Republic striker Patrik Schick in January…Andrew Robertson is set to double his wages to £60,000-a-week when he signs a new Liverpool deal…Manchester United are keen to use their option to extend Phil Jones’ contract with Arsenal and Tottenham interested…Real Madrid have £175m to spend in January and they are targeting three new signings…Barcelona refused to discuss the possibility of Everton signing Portugal midfielder Andre Gomes on a permanent basis…Jadon Sancho is “not wasting any thoughts on a change” away from Borussia Dortmund.