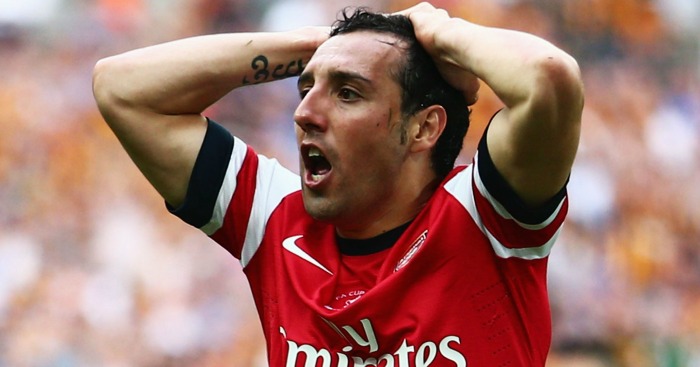 ROMAGNOLI TO COST CHELSEA £50M
With Gary Cahill looking more unreliable by the week and John Terry not getting any younger, the suspicion is that Antonio Conte would still like another central defender. That’s despite buying David Luiz for £34m and having Kurt Zouma back from injury soon.

The Sun claim that Conte must pay £50m if he wants to sign Milan central defender Alessio Romagnoli. The story is low on detail, which includes a lack of evidence that Chelsea actually want him.

Let’s just say this now: There is no way that Chelsea will pay £50m for Romagnoli. Move on.

JUVENTUS TO APPROACH CAZORLA
Interesting line now, even if it might be nonsense. Italian outlet CalcioMercatoWeb claim that Juventus are considering an approach for Arsenal’s Santi Cazorla.

‘According to rumours collected exclusively by our staff, Marotta would be sniffing the shot at no cost to give Allegri another international player,’ Google Translate tells us in pigeon English. ‘Midfield playmaker band but also, if necessary, central, Cazorla would give quality and experience to be exploited especially in the Champions League.’ Never sniff the shot.

It should be said that Cazorla himself has recently spoken on his future, and committed himself to Arsenal: “If they’ll offer me a new contract, I’ll sign it because I am very happy with this great club. I am happy here. I am trusted by the manager and my team-mates.”

TOTTENHAM HOLD TALKS WITH ARANA
We’re staying in Italy, and popping over the road to those fine (we have no evidence for that) folk at TuttoMercatoWeb. They claim that Tottenham are in talks with Brazilian left-back Guilherme Arana. He’s 19 years old and he plays for Corinthians, to answer your first two questions.

As is customary with TuttoMercatoWeb, the ‘exclusive’ is remarkably low on detail. Here it is in full:

‘Guilherme Arana to markets. Idea Schalke 04, that started contacts for the outside of the Corinthians. But there is a post from England, tries Tottenham has set for today a meeting with the entourage of the Brazilian, in London. Hot days in the future. Tottenham tries to put the arrow to Arana.’

In other news, ‘Hot days in the future’ will be the name of by first album.

AND THE REST
Manchester City forward Kevin de Bruyne’s hamstring injury is swiftly on the mend and the Belgium star could be ready to face Everton on Saturday… Steve Bruce will be confirmed as the new manager of Aston Villa on Wednesday… Atletico Madrid are reportedly set to offer Yannick Carrasco an improved contract to see off interest from Chelsea… Valencia hope to sign Mexican striker Javier Hernandez in the January transfer window and are prepared to pay £40m and trigger his buy-out clause.

Xherdan Shaqiri’s brother and agent claims the Stoke star could be a target for Italian side Roma in January… Chelsea winger Willian, linked with a move to PSG, has revealed he wants to finish his career at Stamford Bridge… Tottenham are leading the Premier League race for Peterborough wonderkid Leo Da Silva Lopes… Leicester have joined Lazio and Lyon in the battle to sign Ludogorets’ highly-rated Brazilian forward Jonathan Cafu.