Home All The News Gossip: Kante to choose Arsenal this summer 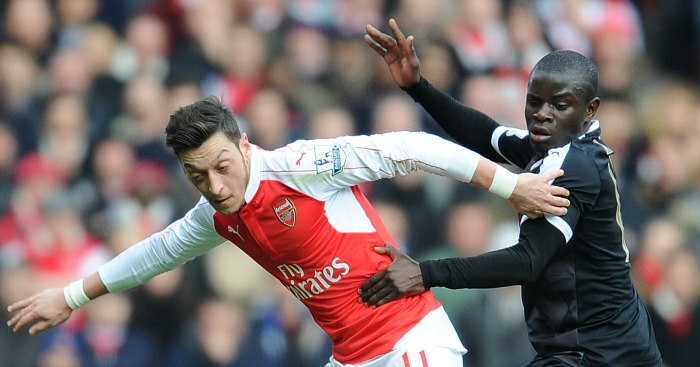 KANTE CHOOSES ARSENAL
If this is true – and it appeared in various places in France on Sunday – then it absolutely makes sense. N’Golo Kante’s stock will never be higher than in Euro 2016 year after he has just won the unlikeliest of titles with Leicester. And Arsenal are the perfect club for him; Kante is undoubtedly an upgrade on Francis Coquelin and Arsenal are a long-term upgrade on Leicester. The Foxes will get their £20m to replace the irreplaceable.

There was some talk of Manchester City also being interested in Kante but the Manchester Evening News claim: ‘Manchester City will NOT move for N’Golo Kante this summer, with Pep Guardiola still focusing on the targets he’s drawn up with director of football Txiki Begiristain. Despite reports in France that City were in advanced negotiations over a deal for the Leicester midfielder, club sources say there is ‘no interest’ in the player who was one of the Premier League’s brightest stars this season.’

EVERTON TARGET BERAHINO
The Sun are claiming he is ‘the ideal man to replace Lukaku’, but that is pretty harsh on the Belgian, who has scored 18 Premier League goals this season while Saido Berahino has contributed only four for the Baggies in another forgettable campaign. Berahino did not even get off the bench for West Brom against Liverpool on Sunday so we’re struggling to see why he would be the £12m choice of an Everton side newly flush with money. You don’t get an influx of money and massively downgrade.

It looks very much like Lukaku will be gone this summer, with PSG cited as the latest to show an interest.

ZLATAN: I KNOW WHERE I’M GOING
Manchester United? AC Milan? LA Galaxy? Huddersfield Town? We don’t know but Zlatan Ibrahimovic claims he already does know where he will be playing next season.

“I know where I will be going next season, but I will not be saying where tonight!” the striker told beIN Sports after bowing out from PSG on Saturday. On Monday, reports from Italy even suggest that Ibrahimovic could join Napoli if Gonzalo Higuain leaves the club. Zlatan join a club where he won’t be guaranteed trophies? Surely not.

Please…..someone in the PL sign #Zlatan we need him here. The ability, confidence & charisma he would add to the league would be huge!