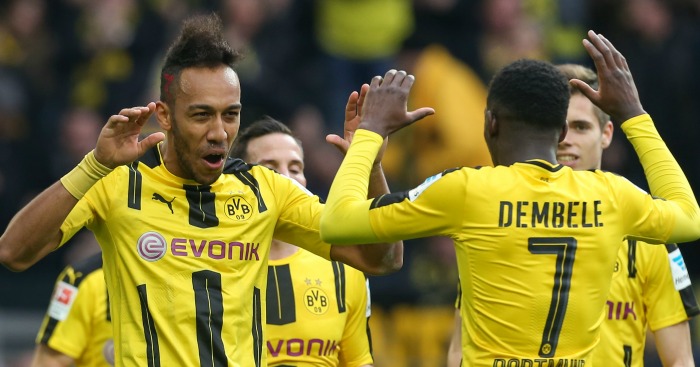 ARSENAL UP AGAINST ATLETICO AND DORTMUND FOR LACAZETTE
Oh Arsenal. No sooner had the club’s PR spiel about transfer warchests and behind-the-scenes overhauls been handily leaked, the club’s supposed top transfer target was linked to other elite clubs.

Alexandre Lacazette has been a reported Arsenal target for three years, and his form shows no sign of abating. Alongside Lionel Messi and Harry Kane, Lacazette is one of only three strikers to score 20 or more league goals in one of Europe’s top five leagues in 2014/15, 2015/16 and 2016/17. A lot of those have been penalties, mind.

Having been again linked with a move for Lacazette this summer, it is now reported that Atletico Madrid and Borussia Dortmund also want the Frenchman. If you were him, where would you go?

MANCHESTER UNITED WANT DEMBELE
We have another Manchester United transfer exclusive from The Sun on Tuesday morning, and another one that doesn’t come from Neil Custis. We’re getting a little worried that the paper have pushed him away from Old Trafford centre stage.

This time it’s Dan King who brings us the news that Jose Mourinho wants to test Borussia Dortmund’s resolve to hang on to Ousmane Dembele. We’re told that Dembele is a £50m target which, given that he cost Dortmund €15m less than a year ago, would represent a whacking great profit.

The other line from King is that should they fail to land Dembele they will target Ivan Perisic. Perisic’s name keeps cropping up, but it does seem unlikely that they would spend big bucks on a 28-year-old.

REDKNAPP IN LINE FOR BIRMINGHAM JOB
In many ways it is the perfect job for Harry Redknapp. There are only three matches left in the Championship season, meaning he can have a long summer off after a month’s work. The mood is desperately low after the sacking of Gary Rowett and appointment of Gianfranco Zola, with the club sleepwalking its way to relegation. Redknapp can go in, gee people up, put an arm around shoulders and try and inspire them to take the four points they probably need to avoid relegation to League One.

The Daily Mirror report that Redknapp, now 70, is in the running to take over at St Andrews, but it should be said that he his touted for every job that requires a short-term fix like this. A reminder that in the last two years Redknapp has been manager of Jordan (for two matches), football adviser at Derby County (for two months) and a consultant for Central Coast Mariners despite saying he would not be travelling to Australia. That man is a hero.

AND THE REST
AC Milan will make a fresh bid to tempt Cesc Fabregas away from Chelsea this summer… Liverpool midfielder Lucas Leiva is hoping to earn a new deal at Anfield… Chelsea goalkeeper Thibaut Courtois looks set to miss the FA Cup semi-final against Tottenham… Stoke defender Glen Johnson is close to agreeing a new one-year contract extension… Romelu Lukaku will not be allowed to leave Everton unless they receive £100m for their star striker… Tony Pulis has warned West Brom’s Chinese owners his squad needs improvement.