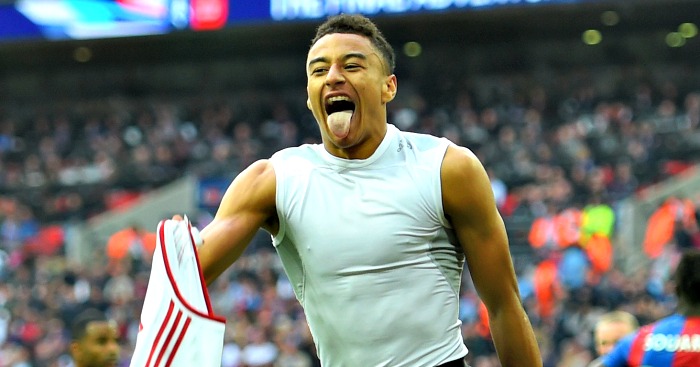 ERRR… LINGARD WANTED BY CHELSEA AND ARSENAL
Oh wow, this one did catch our eye. In The Sun, Mike McGrath has an exclusive on claims that both Chelsea and Arsenal are chasing Jesse Lingard. Sure, why not.

It’s now two months since Neil Custis exclusively told us that Lingard had signed a new contract at Old Trafford, but McGrath now writes that ‘Lingard has one season left on his deal at Old Trafford and the top clubs are ready to swoop as one of the Three Lions’ young prospects’.

While Chelsea’s interest can hardly be disproved, it is interesting that McGrath claims Arsenal are involved in the ‘battle’. This is a club whose transfer business is dictated by the manager. With Arsene Wenger’s future still up in the air, is he really telling Arsenal to sign Lingard?

LIVERPOOL TO SPEND BIG (AND SOME OF IT ON SESSEGNON)
A more realistic claim comes in the Mirror, with Simon Mullock writing that Jurgen Klopp intends to spend big at Liverpool this summer.

Mullock points out that Liverpool made a profit on players last summer, and uses quotes from Klopp to back up the story:

“Of course we will spend money in the summer. Look, it’s only March, but I know what needs to be done and we have a plan,” Klopp said.

“One thing we must not forget is that the players who are already here can improve, but the other thing is the transfers. Are we looking for transfers? Yes. For players? Yes. Are we close to signing them? No, there is nothing to say about that.

“It’s not that we say we want exactly four players or five players, but we have different plans and we know what we want and we are working really hard.”

Back to Mike McGrath in The Sun, who ‘exclusively’ says that Liverpool will spend £10m on Ryan Sessegnon, who Klopp apparently believes is the long-term solution to the club’s left-back problem.

Given that the story comes hours after Sessegnon scored twice against Newcastle on Saturday – coincidence, of course – it’s worth pointing out that he didn’t even play as a left back.

BARKLEY IS TOTTENHAM’S TOP TARGET
Ahoy hoy, this is a bold claim. We sort of assumed that attacking midfield was the one position in which Tottenham wouldn’t want to invest this summer. Christian Eriksen, Heung-Min Son, Dele Alli, Mousa Dembele, Erik Lamela; the list goes on.

It’s Neil Moxley in the Sunday People (we have our own reservations) who makes the claim that Tottenham have made the signing of Ross Barkley their top priority for the summer. ‘Ross Barkley will be Spurs’ No.1 transfer target this summer,’ the piece reads. You can’t be more explicit than that.

The piece is woefully low on detail, even using Ben Davies’ new contract to pad it out, but claims that Barkley will cost more than £30m and that Tottenham want to buy. Let’s just see, eh.

AND THE REST
Southampton have joined the chase for England keeper Joe Hart amid fears Fraser Forster will leave… West Ham will make an approach for Pablo Zabaleta this summer… Steve McClaren will have his position as Derby boss reviewed at the end of the season… West Ham are planning to sell Andy Carroll in the summer – and replace him with Liverpool’s Daniel Sturridge… Inter Milan are leading the race to sign Chelsea target Domenico Berardi from Sassuolo… West Brom are planning a £12m swoop for Burnley hitman Andre Gray this summer… Winston Reid is in line for a West Ham contract extension worth more than £70,000 per week… Chelsea and Manchester City are leading the chase for Sevilla midfielder Steven N’Zonzi…. Chelsea have been told they will have to pay £30m if they want to beat off Manchester City to land Middlesbrough star Ben Gibson.