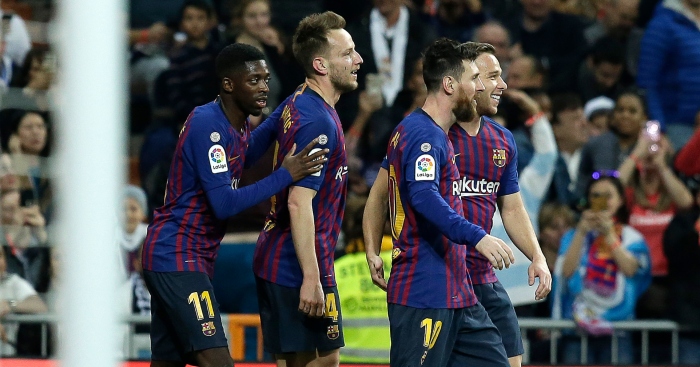 MAN UTD TO MISS OUT ON RAKITIC?
Barcelona midfielder Ivan Rakitic has been strongly linked with a summer move to Manchester United but – according to AS – his performance and goal in victory over Real Madrid ‘has given the Barcelona board another headache in their dealings with the Croatia midfielder over a new deal’. It sounds like they were prepared to sell the Croat this summer (and agreed a deal for Frenkie de Jong to arrive in the summer) but now they are in a quandary.

Inter Milan, Manchester United, Bayern Munich and PSG are all said to be interested in Rakitic, but AS say that ‘selling him in the summer would be a contentious move’ from Barcelona.

LET’S ALL HAVE AN ISCO
The story in Tuttosport is ostensibly about Juventus wanting to raid Real Madrid for pretty much half their team this summer, but there is an aside in brackets that we are happy to seize upon on a slow day for gossip. They say – thanks to Google Translate – that ‘on Real front, to reduce spending with a view on Marcelo, or on the same Isco (already on the notebook of Liverpool and the two Manchester)’, so we can safely say that Isco is a target for the three biggest clubs in England. Which is nice, because we would like to have him here.

Isco came on the pitch for 14 minutes as Real Madrid lost 1-0 to Barcelona this weekend. Real Madrid fans are not going to be happy if they sell him and keep a certain Welshman…

Isco was 5 times better than Bale today, and this is the man who played the least minutes in the entire league in 2019.

MAXIMUM INTEREST FROM LIVERPOOL
The price tag quoted on Sunday morning for Celta Vigo striker Maxi Gomez was £35m, but the Spanish club might have watched Liverpool’s desperate 0-0 with Everton and concluded that the Reds might spend a little bit more on a new striker this summer. Especially as Luis Suarez has apparently been in the ear of various former Reds teammates, claiming that his fellow Uruguayan is exactly the right man for Anfield.

Gomez is just 22 but has a record of 27 goals in 59 La Liga games for a poor Celta Vigo side. West Ham have previously tried to sign him but he might well have moved out of their league and entered that of Liverpool and Chelsea. Though he did miss a doozy on Sunday night, so maybe isn’t much of an upgrade on Mo Salah, after all.

Maxi Gomez with the miss of the weekend, wow. #EibarCelta #LaLiga

AND THE REST
Arsenal are continuing their search for a left-back with Barcelona looking to land Nacho Monreal this summer…Arsenal fans are putting pressure on the club to recall Calum Chambers…Arsenal are interested in signing Dalian Yifang attacker Yannick Carrasco on a permanent deal.