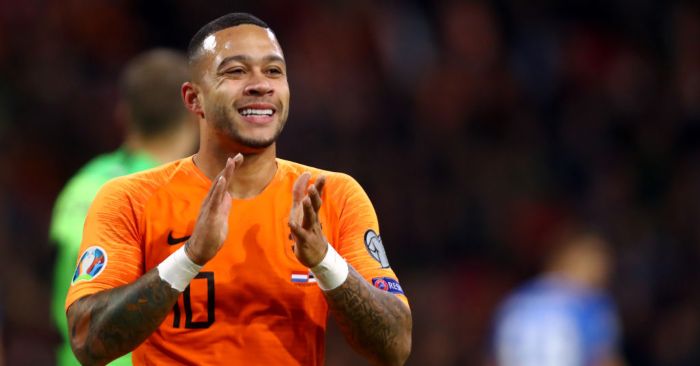 WALK ON IN, MEMPHIS
‘Expiring in 2021 the Dutch striker Memphis Depay, born in 1994, likes Liverpool and Tottenham: it is valued by the Lyon 50 million euros.’

Manchester United have long been said to have, if not a buy-back clause, then first refusal on the Dutchman. But for £42.6m, either of the most recent Champions League finalists will take an interest. Although Jose Mourinho did sell the last time they were together.

‘CAUSE WE ARE SOYUN NOW
According to the Sunday Times, Manchester City have made a Vincent Kompany replacement ‘a priority for the January transfer window’. You’d think they’d do that in the same window in which he left, but there you go.

Top of that particular list is Caglar Soyuncu, but they ‘face serious difficulties in persuading’ Leicester to part with him. He is precisely the sort of player Pep Guardiola wants: ‘a ball-player who excels in possession but is also rugged’. Yet the Foxes do not need to sell, have shown that in the past with similarly coveted players, and Soyuncu’s ‘bond’ with Brendan Rodgers is described as another ‘hurdle’ to any move.

City are also ‘working to identify options for a midfield successor to David Silva and may also make summer moves for an additional striker and right-back’. All of which means that Guardiola is ‘increasingly likely to stay’.

FLORES IN THE WINDOW
And it looks like the end of the remarkably short road for Quique Sanchez Flores at Watford. Appointed on September 7, the Spaniard ‘will be relieved of his duties on Sunday’, December 1, according to The Athletic.

The players will report to Watford’s training ground as usual the day after a morale-sapping 2-1 defeat to Southampton. A meeting has been ‘called’ where Flores will be informed of his second Hornets departure in three years.

It is said that some members of the squad ‘won’t be disappointed’. And Watford have outlined their criteria for the new manager, who ‘will likely be recruited from continental Europe’.

‘They needed to be currently out of work and to have not previously been employed by the club, as Sanchez Flores was.’

Excellent. Sam Allardicio it is.

AND THE REST
Arsenal may wait until the summer to land their top managerial target Brendan Rodgers, but the Leicester boss regards the Gunners post as his dream job… Manchester City assistant boss Mikel Arteta is the man Arsenal want to replace Unai Emery… West Ham are monitoring Arsenal interim boss Freddie Ljungberg as a potential replacement for Manuel Pellegrini… Everton want Bournemouth boss Eddie Howe, a boyhood Toffees fan, to succeed under-fire manager Marco Silva… Sheffield United will move for former England goalkeeper Ben Foster, 36, if Watford are relegated at the end of the season.