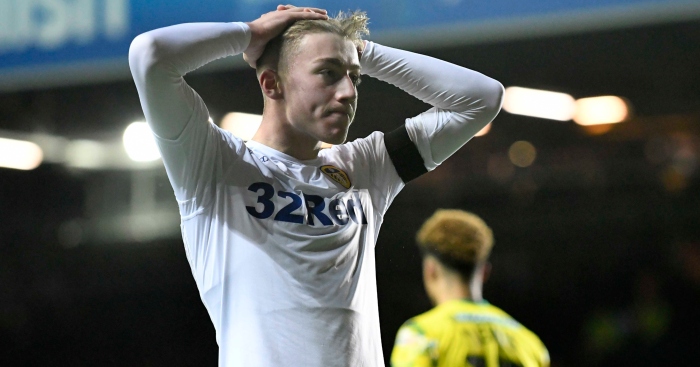 LIVERPOOL EYE LEEDS WINGER
Oooh. A genuine new name here as the Daily Express claim that Liverpool boss Jurgen Klopp ‘is interested in adding the highly-rated wideman’ Jack Clarke to his squad for next season. Clarke is just 18 and only made his Leeds debut in October but has now made four Championship starts for Marcelo Bielsa’s side, scoring twice and adding another two assists. Klopp has apparently been impressed and may move for Clarke even if Leeds are promoted this May.

Clarke started against Middlesbrough on Saturday but came off at half-time before falling ill on the bench; he was stretchered away and was given oxygen. The club later issued a statement reading: ‘Jack Clarke began to feel unwell during the second half of our Sky Bet Championship fixture with Middlesbrough and received medical attention. The player is responsive and attending hospital with the club’s head of medicine and performance.’ He then left the hospital “happy and smiling”, according to Ian Harte.

MAN CITY: LET’S ALL HAVE AN ISCO
First, a warning: This comes from Don Balon so should be taken with a massive pinch of salt. But it does make a degree of sense as Manchester City do need a long-term replacement for David Silva and Isco will be available this summer. The fee mentioned is £66m, which seems like a fair price.

There may be a fly in the ointment, mind, as reports in Italy suggest that Juventus are eyeing Isco as a replacement for Paulo Dybala, if he leaves for pastures new (probably Inter Milan) in the summer.  Meanwhile, Don Balon suggest that Marco Asensio or Mohamed Salah could be a target for Juve, who apparently lead the race to sign highly-rated Ajax defender Matthijs de Ligt.

AND THE REST
Wolves are in pole position to land Portuguese football’s latest wonderkid Joao Felix…Napoli midfielder Marek Hamsik is on the verge of a transfer to the Chinese Super League…Hibernian will appoint Michael Appleton as their new head coach…Chelsea will reportedly try and include Franck Kessie in any deal which sees Tiemoue Bakayoko join AC Milan permanently.