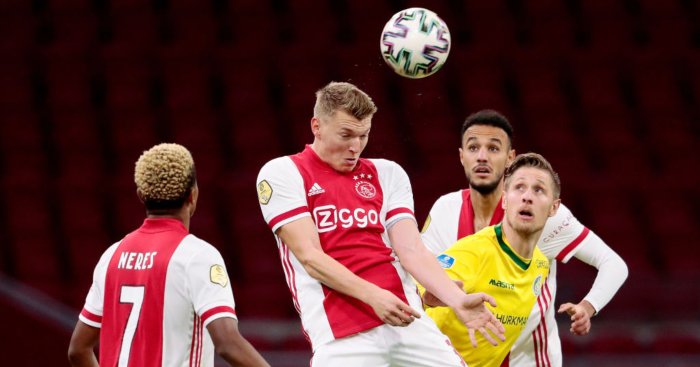 Liverpool are monitoring a young Ajax defender, while a Man Utd player ‘fears’ his exit could fall through…

LIVERPOOL BACK FOR YOUNGSTER

Liverpool are ‘monitoring’ Ajax defender Perr Schuurs two years after he had a trial at the club, according to reports.

Nathaniel Phillips filled in at centre-back for Liverpool in their 2-1 victory over West Ham on Saturday evening. The 23-year-old defender had been unexpectedly thrust into action following injuries to Virgil Van Dijk, Fabinho and Joel Matip.

And there have been rumours that Liverpool could be forced to dip into the transfer market over January to bring in some reinforcements in that position. The Daily Mirror today claim that Schuurs has ‘impressed’ Liverpool boss Jurgen Klopp with his performance in the recent Champions League encounter between the Reds and the Dutch side.

Schuurs has ‘already been on trial at Anfield as a 17-year-old’ but Liverpool thought it was ‘better to leave him in Holland’ despite his good display. The 20-year-old has been ‘likened to a young Virgil van Dijk’ and has earned himself a regular place in the Ajax starting XI following his move from Fortuna Sittard, where he was captain.

After the Champions League clash, Jurgen Klopp and his coaches were talking ‘highly of his display’ and it ‘could lead to an offer in the January transfer window’. The Reds will get ‘another close look’ at Schuurs when the Dutch side play at Anfield on December 1st.

Man Utd defender Phil Jones is concerned that his potential January move to Burnley could fall through because of a possible takeover of the club, according to reports.

The Sun reported ten days ago that Jones looks to be heading for the exit door at Old Trafford. The 28-year-old was left out of the Red Devils’ Champions League and Premier League squads and could be looking for a move as soon as January.

And now the Daily Star claims that he ‘fears a potential move to Burnley in January is under threat’ due to the Clarets’ ‘planned takeover’. Apparently Burnley had ‘pencilled in a loan swoop’ for Jones but the Englishman could be left ‘in limbo’.

There was interest in James Tarkowski during the summer transfer window and Sean Dyche is preparing himself for more offers. However, if the £200m takeover of the club by Egyptian businessman Mohamed El Kashany and lawyer Chris Farnell happens, then the club will no longer be tempted to sell, leaving Jones looking for a move elsewhere.

It would see Tarkowski remain at the club and would ‘clear the way’ for Championship sides Derby and Middlesbrough to seal a deal for Jones, who is on £100,000 a week at Old Trafford.

On Jones’ omission from their squads, Solskjaer recently said: “Phil has been injured and he’s had an operation and he’s working really hard to be back. He’ll hopefully get fit during December.

“That was a natural thing, when you’re injured you can’t really be in the squad, can you? He’s working really diligently and he’ll be coming back soon.”

Inter Milan are willing to sell Denmark midfielder Christian Eriksen…Brazil international Neymar has told Paris Saint-Germain he wants to stay at the club…Real Madrid forward Isco is keen to link up with ex-boss Carlo Ancelotti and former team-mate James Rodriguez at Everton…Malmo centre-back Anel Ahmedhodzic is interesting Chelsea, with the Blues planning an £8m bid…Manager Gennaro Gattuso is edging closer to signing a new contract at Napoli.