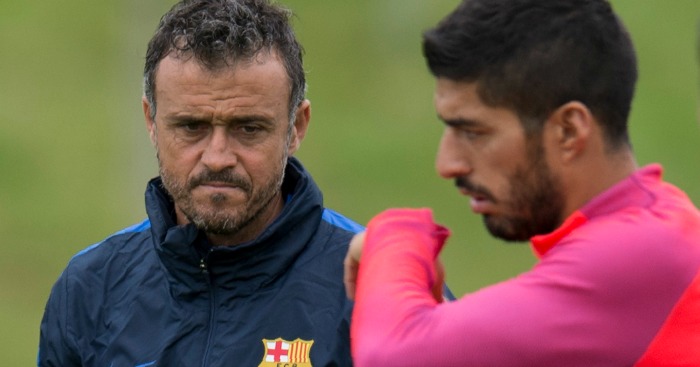 MIXED MESSAGES: CHELSEA, ENRIQUE, SUAREZ
Unsurprisingly, there is an awful lot of chat about Antonio Conte in Wednesday’s papers. He will leave soon, now or later, won’t quit and has lost the trust of the players, depending on who you read.

However, there’s other Chelsea chatter too. Spanish newspaper Sport says that Luis Enrique is Chelsea’s choice to replace Conte, which pretty much tallies with what the English papers have said and the bookmakers think.

However, Goal boldly state that Enrique is not interested in cutting short his 12-month sabbatical. So do Chelsea appoint Carlo Ancelotti or Guus Hiddink until the end of the season and then go for Enrique?

The ballsiest line comes from Le 10 Sport, who make us instantly suspicious. They say that Enrique’s first signing as Chelsea manager will be Luis Suarez. That’s a ludicrous claim given that we don’t even know he has got the job yet.

As it is a day ending in ‘y’, Wednesday brings more rumours of the move. Spanish newspaper Sport says that De Gea will be Real’s No. 1 target this summer, but also reckon that Manchester United are about to offer their goalkeeper a new contract.

However, they also say that Real are prepared to wait until summer 2019, when De Gea will be available on a free, and make do with Keylor Navas and Thibaut Courtois in the meantime. How awfully good of them.

ALISSON LINKED WITH LIVERPOOL. SOMEONE THINKS HE’S GOOD
From one superb goalkeeper to another. Roma’s Alisson is surely the best stopper in Serie A on current form, so it’s no surprise he is also being linked with a move.

Not quite sold on the source here, former Roma coach Roberto Negrisolo. I’m sure he means well, but does he actually have any sway? No, he just thinks that Alisson is really good.

Anyway, here’s what Negrisolo has to say:

“Is Alisson worth €50m? Don’t be silly, he’s worth far more than that. I don’t think many people have realised who Alisson is. This guy is a phenomenon. He is the number one of number ones. He is the Messi of goalkeepers, because he has the same mentality as Messi. He is a goalkeeper who can mark an era.

“There is absolutely no comparison with Gianluigi Donnarumma, because Alisson is extraordinary. The first time I saw him play, he wasn’t yet on the Roma books. I watched him play for Brazil and he made an enormous impression on me.

Liverpool reportedly want him in the summer. It makes a huge amount of sense.

RUGANI TO ARSENAL. ISH
Do you know what is refreshing? Not reading a story about a club wanting a player that has clearly been leaked by the player’s agent, but instead the agent just saying it himself. There’s a degree of transparency in that which I can get on board with.

The agent of Juventus defender Daniele Rugani says that Arsenal like his boy:

“Daniele’s doing well, I’m happy for him. Arsenal? They didn’t launch any attempts for him.

“They expressed a liking for him but we have respect for Juventus.”

We know what you’re doing, fella.