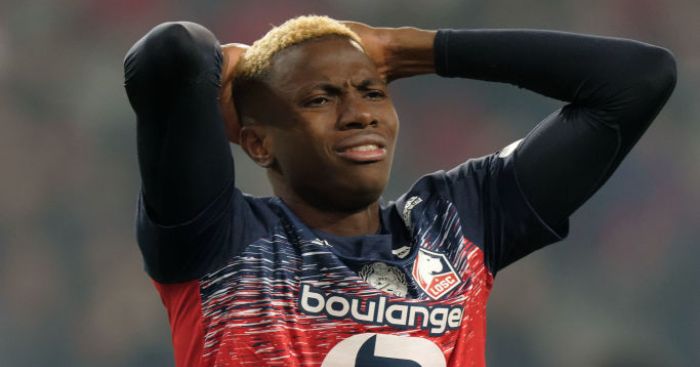 TO THE VICTOR
At 20 years old, with a Champions League goal against Chelsea and as many strikes in Ligue Un this season as Kylian Mbappe and Memphis Depay, it should perhaps come as no surprise that Victor Osimhen is attracting attention.

Last week, Lille president Gerard Lopez confirmed that “there is already interest for sums of about this level” – that being €70m. And Sky Sports finally offer us some names.

They say ‘a host of clubs’ are known to be ‘monitoring’ his development, with Liverpool, Chelsea and Tottenham chief among them. He ‘is currently the second-highest performing striker’ in France’s top tier, behind only Wissam Ben Yedder. So yeah.

But Nigeria international Osimhen is ‘happy’ at Lille and ‘expected to stay’ until at least the summer to help them qualify for the Champions League again, which they are on course to do. The only way that will change is if ‘a January offer that is too good to refuse’ is made.

BAYERN AND SELLING
Over at Manchester City, Leroy Sane has ‘made his decision to switch to FC Bayern’.

This comes courtesy of German newspaper Bild, for whom we have no subscription and thus cannot tell you much more. It’s a cruel world.

But the Daily Mirror have painstakingly sifted through the story to tell us that Bayern ‘are expected to reignite their interest’ in January, despite the existence of two stumbling blocks: the knee injury that will keep him out until February, and the £127m fee Manchester City will demand.

PEP TO PARIS
Letting Sane go could be the final straw for Pep Guardiola in the Premier League. Le10Sport say PSG might try and tempt him over to France.

Their exclusive concerns the potential coaching appointment of Xavi at the Parc des Princes. The prospect of him making that move from his current post of Qatar Stars League club Al Sadd manager ‘is not to be excluded’.

Part of that deal is that Xavi ‘would openly push’ to be joined by Guardiola, who ‘does not seem to want to continue in England’ beyond the expiration of his current deal in 2021.

With Thomas Tuchel coming under inevitable pressure after not winning all of the things ever, Massimiliano Allegri is also being courted. Tuchel’s future will depend on Champions League progress against his former club Dortmund and beyond. Failure would surely expediate any approach for Guardiola. Let’s just wait for City to draw PSG in the quarter-final.

AND THE REST
Manchester City are demanding £1m from Arsenal to release assistant Mikel Arteta from his contract – the Gunners want to name their former Spanish midfielder as their new manager… Carlo Ancelotti is set to be named Everton manager after signing an £11.5m-a-year deal… Juventus are set to keep hold of Turkish defender Merih Demiral, 21, amid interest from multiple Premier League clubs as well as AC Milan… Spanish midfielder Marcos Llorente, 24, is wanted by clubs this January but Atletico Madrid do not want to sell him… Speculation surrounding 29-year-old Welsh midfielder Joe Allen’s future at Stoke is expected to intensify as the January window approaches.